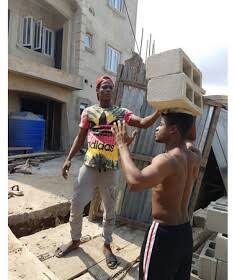 The Lagos State police command has arrested a bricklayer, one Mr. Archibong Koko, for allegedly defiling a five-year old girl.  Lagos police boss, Imohimi Edgal, who ordered the arrest of the suspect, noted that his command would not tolerate any assault and abuse meted on children.According to him, “On June 24, at about 5:40p.m. information was received by the DPO Onireke Division that a girl has been defiled at Dansa Abule-Oshun. A team of detectives were mobilised to the area where the suspect by name Achibong Koko, aged 35, was arrested.

“According to the mother of the victim, her daughter left her room while she was asleep, unknown to her that her little daughter was being violated. However, she noticed that her daughter was not walking properly, so she questioned her and she revealed that the suspect took advantage of her. The victim was taken to the hospital where the doctor confirmed that she was violated and her hymen ruptured as a result.”

The suspect however denied the allegation. According to the suspect, “I am a bricklayer. I know the girl and her parents but I did not rape her. She did not come to my room. I am innocent of the allegations.”

Meanwhile, detectives from the Lagos State police command have busted a human trafficking syndicate, which specialises in smuggling under-aged girls. The command also rescued seven teenage girls from the hideout of the syndicate.The ladies, who were aged between 17 and 35 years, told newsmen yesterday that they were promised employment in Lagos by a member of the syndicate, whose identity they gave simply as Rita.Identities of the girls are Akpotu Progress, 17; Florence Emonena, 35; Celina Abosa, 20; Augustine Tessy, 27; Glory Monday, 21; Gift Jacob, 25; and Lewisca Akalu, 20.

The agent embarked on the journey from Delta to Lagos with the victims last Saturday. However, on reaching Agofure Motor Park at Mile 2, the agent, according to the ladies, pretentiously went to buy phone airtime to call another suspected member of the gang.Explaining how the girls were rescued, the Commissioner of Police, Imohimi Edgal, said: “information was received from a member of the public that some girls were seen at Agofure motor park, Mile 2, Lagos at about 6:00p.m. last Saturday. They appeared lost and confused, claiming that one woman by name Rita, surname not yet known, lured them to Lagos.

“Based on the information, detectives led by Woman Inspector, Ebun Anyanwu, were mobilised to the scene. A member of the syndicate that brought the girls to Lagos, one Emmanuel Daniel, aged 30, was arrested”.