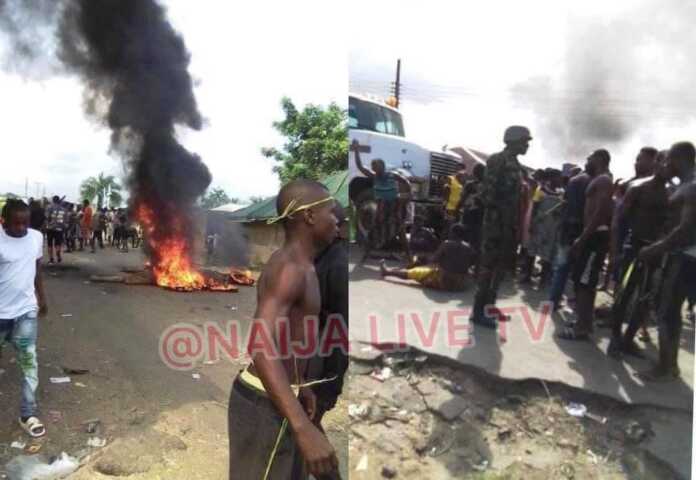 There is palpable tension in Biseni Community in Yenagoa Local Government Area of Bayelsa State as youths and women prevented men of the Nigerian Army from freeing five tankers conveying black liquid suspected to be stolen crude.

According to a Chief of Biseni, Justus Bekesu, who spoke to NAIJA LIVE TV via telephone, “last week Sunday, 25 April, 2021, we saw tankers coming out of Biseni forest where both SPDC and Agip drill crude oil from. Suspecting foul play our youths stopped them and asked what was contained in the tankers.

“They mixed water with chemical. They claimed that they avoid disposing it at the site that may damage the environment, they were taking it to a safe place for proper disposal. But our youths insisted that they wanted to confirm if what they were saying was true.”

“To our greatest surprise, when they checked, the first tanker was conveying water while the rest were filled with crude oil. And when the soldiers were confronted with the facts, they claimed that they didn’t know that the other tankers were carrying fuel. After much argument, they left.”

“Only for us to wake up this morning to see over 30 armed soldiers in our community. They even came with tyre pumping to put air in the tyres of the tankers our youths had deflated with the intension to move them away by force.”

“That was when our youths and women came out and blocked the road preventing to from leaving by any means. It was so terrible that schools were even shutdown to safeguard our children from any eventuality. At the end they failed and have left but we still fear for a reprisal attack from the military and whoever sent them.”

The head of the Niger Delta resource center of the Environmental Right Action (ERA), Morris Alagoa, who also confirmed the incident to NAIJA LIVE TV said “information reaching me from Biseni just now indicates some men on military uniform with guns arrived the environment to release trucks loaded with crude oil which was detained by community folks. And, there is tension. Serious tension.

“According to my source, few days ago some tankers were seen coming out from the bush of Biseni and the vigilant youths of the clan stopped them to know what the contents of the tankers was. They were told it was WATER. So, the youths climbed up to check and discovered that the content in the tankers was CRUDE OIL. So, they prevented the tankers from leaving the environment by deflating the tyres.

“This morning, armed men in military uniform suspected to be soldiers of the Federal Republic of Nigeria arrived the scene and made attempts to take the takers with stolen crude oil away. This was resisted by the youths, men and women of Biseni. That brought about the tension.

“The Soldiers should be held accountable for any injuries or loss of life and destruction of property as a direct result of this situation. Already, I have made contacts with the authorities in Bayelsa State. The State Government should stand by and with the good people of Biseni at this trying times. Kudos to the Biseni People.”

“We take this as confirmation that some military personnel are aiding the crime of bunkering in the Niger Delta and, this is highly unacceptable. The Bayelsa State government and Federal government should investigate this matter to logical conclusion and deal with the issue accordingly.

“The good people of Biseni should be commended for exhibiting this rare act of bravery and patriotism. The act of those responsible for this attempt at stealing crude oil in five giant tankers should be condemned in its entirety.”