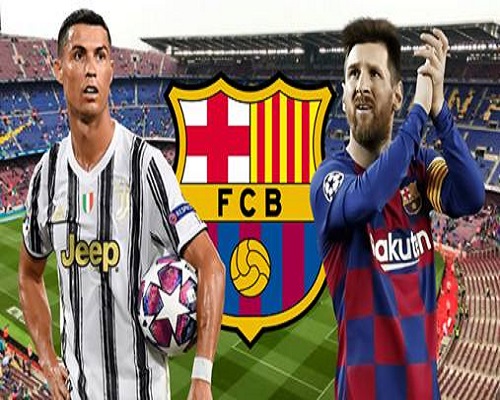 Cristiano Ronaldo has reportedly been offered to Barcelona in a sensational move that would see him play alongside Lionel Messi.

The former Real Madrid talisman could be on his way out from Juventus, after two seasons with The Old Lady – who are trying to get his huge £28m-per-year salary off their books, according to Spanish journalist Guillem Balague.

He explained to the BBC that the Serie A champions are desperate to ship off Ronaldo due to his astronomical wages that they have been offering him out to Europe’s elite, including Barcelona.

Juventus’ hierarchy of sporting director Fabio Paratici, vice president Pavel Nedved and chairman Andrea Agnelli with new boss Andrea Pirlo will hold a meeting on Thursday to decide who will leave out of Ronaldo and Paulo Dybala, according to Sportmediaset.

The Italian giants can reportedly only afford to keep one at the club for next season due to their financial situation and desire to bring in at least one striker, a right-back and a winger.

Both Ronaldo and Dybala have contracts at the club until the summer of 2022 and Juventus could get between £50m and £90m for either of their stars.

‘He’s been offered everywhere, including Barcelona,’ Balague told 5 Live Sport on Ronaldo: I’m not sure if they can get rid of him easily with the kind of money he earns. Who is going to pay that kind of money?’

Barcelona have been hit hard financially by the coronavirus pandemic and look unable to make big-money signings during the summer period, as they hope to bridge the gap to LaLiga champions Real Madrid.

While an attacking duo of Messi and Ronaldo has been a spectacle football fans have been crying out for since they both announced themselves on the world stage around 15 years ago, it looks incredibly unlikely to become a reality this summer.

The two have been battling it out on the highest stage in football and dividing opinion as to who is the better player for over a decade. They share eleven Ballon d’Or awards between them; Messi with six and Ronaldo with five, and have a combined 1,272 career goals.

Ronaldo still has two years left on his deal with Juventus, as he penned a hugely lucrative four-year deal back in 2018. The player has made no comment or action to suggest he wants to leave the club, however, with the recent sacking of Maurizio Sarri his priorities for the future remain unknown.

Amid the arrival of new Juventus manager Andrea Pirlo, the club are looking to axe players such as Aaron Ramsey and potentially Dybala as they look to rebuild under the Italian. The Welshman’s reported £250,000-per-week salary would help fund a new-look team that the Serie A side want, after they crashed out of the Champions League to Lyon.

New Juventus boss Pirlo, who was appointed on Saturday, is looking to rebuild his squad

New Juventus boss Pirlo, who was appointed on Saturday, is looking to rebuild his squad

While Ramsey has not featured much for Juve this season and his loss would not have much impact on the pitch, Ronaldo has been the club’s top goalscorer since his arrival and his presence would be sorely missed if he was to depart. He has scored 65 goals and managed 18 assists from 89 matches in a Juventus shirt.

Balague explained: ‘The reason why Cristiano Ronaldo has been linked with PSG, it’s not so much because PSG are thinking of getting him, but because Jorge Mendes [Ronaldo’s agent] has been given instructions to actually find a team for Ronaldo.’

While there has never been much interest from Paris for the talisman, a report from France football suggested that Ronaldo was considering a move to Paris Saint-Germain to form an attacking trio with Neymar and Kylian Mbappe.

The report claimed he dreamed of playing alongside Neymar and Kylian Mbappe, having maintained a close bond with the Brazilian star while also reportedly ‘adoring’ the France World Cup winner.

The Portuguese attacker instead opted to join Juventus in July 2018 in a huge money move from LaLiga giants Real Madrid.

Ronaldo had a hugely successful career at the Bernabeu, winning two LaLiga titles and four Champions Leagues. He completed a £90million move to Italy and continued his impressive scoring form inside his first two seasons, despite turning 35 years old back in February.

However, in the last few months the Portugal international has been rumoured with moves across the globe along with the team he used to play for.

Balague added: ‘We have seen this over the last months, we have seen links with Real Madrid, Madrid said “no chance! He’s not coming back.”

‘There have been talks about MLS et cetera, because Juventus wants to get rid of that wage. It’s as drastic as that.’