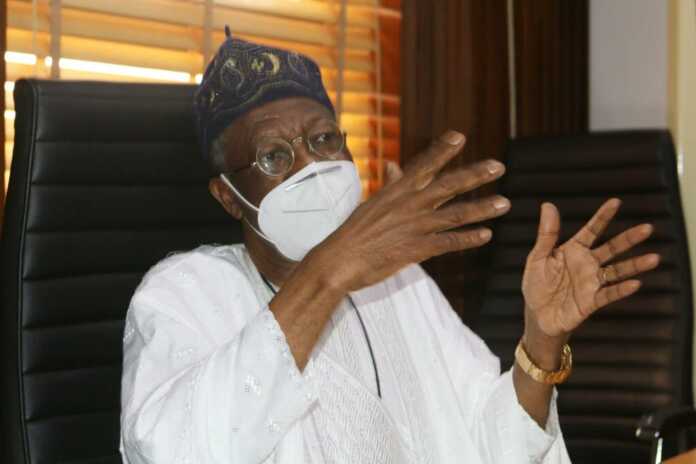 The minister said Twitter ignores “hate” messages from the proscribed Indigenous People of Biafra (IPOB) but was quick to enforce its rules on the president.

The social media platform deleted the tweet wherein Buhari spoke about the civil war experience and threatened to deal with those “bent on destroying” Nigeria through “insurrection.”

“Those of us in the fields for 30 months, who went through the war, will treat them in the language they understand,” he had said.

Twitter said the message — which many Nigerians had reported — violated its rules.

It did not provide further details on the action, but its policy states that such measure is sometimes taken because “the behaviour violates the Twitter rules.”

When he addressed state house correspondents on Wednesday, Mohammed accused the platform of turning a blind eye on the activities of IPOB, which Nigerian authorities have declared a terrorist organisation.

The monster said: “Twitter may have its own rules, it’s not the universal rule. If Mr President, anywhere in the world, feels very bad and concerned about a situation, he is free to express such views. If an organisation is proscribed, it is different from any other which is not proscribed.

“Two, any organisation that gives directives to its members to attack police stations, to kill policemen, to attack correctional centres, to kill warders, and you are now saying that Mr President does not have the right to express his dismay and anger about that?

“I don’t see anywhere in the world where an organisation, a person will stay somewhere outside Nigeria, and will direct his members to attack the symbols of authority, the police, the military, especially when that organisation has been proscribed. By whatever name, you can’t justify giving orders to kill policemen or to kill anybody you do not agree with.”

Buhari had posted the tweet while warning those “misbehaving in certain parts of the country”, particularly in the south-east where government infrastructures have been under attack.

Although IPOB continues to deny responsibility for the attacks, TheCable found out that killings in the region tripled after the secessionist group launched its militant arm.