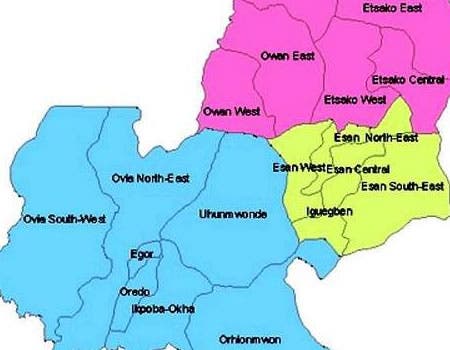 A statement by the president of BSM, Curtis Eghosa Ugbo, insisted that the Benin name for the community which is in Benin Kingdom under the domain of the Oba of Benin, Omo N’Oba Ewuare ll, is Gelegele and not Gbene as being peddled by Ijaw elements in the riverside community.

Ugbo said the Ijaw people should realise that they are settlers in Benin Kingdom, noting that the Benin people are accommodating but their hospitality should not be misconstrued as a sign of weakness by those who hide under different aliases and groups to trigger crises which will end up consuming them.

He said, “They should be informed that we are not contesting anything with them as regards their Gelegelegbene. Our area of interest lies within our territory, Gelegele in Ovia North-East Local Government Area of Edo State where we have over the years accommodated them as it is our nature to be a good host.”

He faulted the claim by Izon Ibe Dragnet to the effect that they were expressing anger over some issues relating to a court case between Ijaw and Benin over Gelegele which he emphasised they corrupted to Gelegelegbene.

“Not only that they went as far as casting aspersions on the personalities of some highly respected legal luminaries of Benin extraction. Let us sound it very loud and clear to the settler Ijaws that there is no town or community in Benin Kingdom called Gelegelegbene in Ovia North Local Government Area of Edo State. For all we care, the irritant Izon Ibe Dragnet may be talking of a community that is situated in Bayelsa State acclaimed as a homogenous Ijaw State,” he added.

The BSM president added that the brains behind the pseudo Izon Ibe Dragnet should be called to order immediately before they drag their kinsmen into a dragnet of no return as far as the Gelegele issue was concerned.

He warned that the Benin people were “being stretched to the limit and it will be a matter of good judgment if they call themselves to order now before it is too late”.

POS operator arrested in Edo for collecting ransom for kidnappers

We’ve stopped farming for fear of being raped, killed by herdsmen – Edo women

85% of Nigerian sex workers in Europe from Edo – CLEEN Foundation