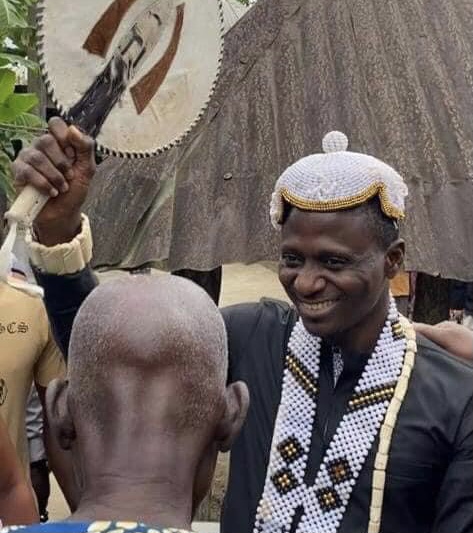 The arrest of the Paramount Ruler of Azuzuama Kingdom in Southern Ijaw Local Government Area of Bayelsa State, H.R.H Dr. Selky Kile Torughedi popularly known as Young Shall Grow earlier today by men of the State Police Command has triggered protests in the state.

The protesters, made up of indigenes of the Azuzuama community, the Ijaw Youths Council (IYC) and the Movement for the Survival of the Izon Ethnic Nationality (MOSIEND), described the arrest and detention of the Traditional Ruler as politically motivated and an attempt to instigate violence in the area.

NAIJA LIVE TV gathered that while H.R.H Dr. Selky Kile Torughedi, was selected by the King makers of the Community due to his philanthropic nature in the area and involvement in mass empowerment scheme, employment of nurses in community clinic and mass feeding scheme. He is reported to be the most popular candidate elected to occupy the throne.

One of the protesters, Comrade Robinson Wike Avoke, argued that the continued detention of the Paramount Ruler is inimical to the peace of the area and called on those involved to stop forthwith as the paramount ruler is the authentic one chosen by the community.

Also speaking, an Ijaw Elder, Elder Victor Eyororokumo told NAIJA LIVE TV that a few persons have met with the detained traditional ruler and assured the protesters that the matter at hand is civil and not a criminal issue,” we called on the Deputy Governor and the Commissioner of Local Government Affairs to resolve the issue and not allow it deteriorate into issues that may not be controlled.”

The lawyer to the arrested Traditional Ruler, Ebikebuna Augustine Aluzu Esq, confirmed his arrest and said there has been no charges leveled against him by the Police,” the Commissioner of Police Invited him on Saturday and as a man of peaceful disposition honored the invitation. Upon meeting with the Commissioner of Police, he was asked to make statement at the Operation Puff Adder office which he did.”

“And ever since he made the statement the police have been holding him against his will. i came in at about 6pm on Saturday to intercede and ensure my client have bail.As at today, no charge has been level against him. The police have not said anything. And his subjects from Azuzuama are here protesting peaceful against the detention of their newly paramount ruler.”

Aluzu also confirmed that his client, H.R.H Dr. Selky Kile Torughedi popularly known as Young Shall Grow, was duly elected as Paramount ruler of the Azuzuama community by his people to succeed the late Paramount Ruler, N.T.Mathew and called on those against his ascension of the throne to go to court instead of dragging a civil matter before the Nigerian Police.