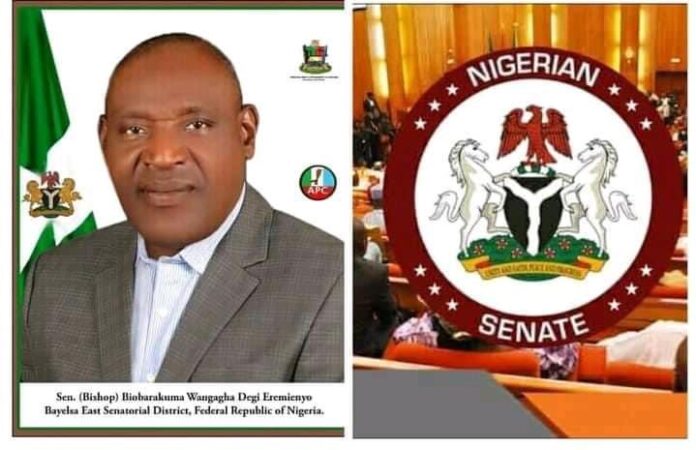 The Senator representing Bayelsa East Senatorial District, Chief Biobarakuma Degi-Eremienyo has so far facilitated over 60 capital projects across the three Local Government Areas (Brass, Nembe and Ogbia) which make up the senatorial district.

This was revealed via a statement made available to the public on Wednesday, 20th January 2022.

Going outside his immediate constituency, the lawmaker also facilitated the supply and installation of a solar-powered borehole at Oboleli in Southern Ijaw LGA of Bayelsa State.

Other projects he has facilitated include renovation of Okpo square and construction of Okpoama town hall both in Okpoama in Brass LGA; supply and installation of a solar-powered borehole at Liama and Sangana communities all in Brass LGA as well as the training and empowerment of over 300 persons from the senatorial district.

In the 2021 fiscal year, according to the statement, the lawmaker has also facilitated several projects, hinting that 80% of them have been completed and others in different stages of completion.

Others are the installation of solar-powered street lights at Sabatoru, Nembe LGA; shore protection with concrete at Agada-ama in Nembe LGA; construction of solar-powered borehole at Okpoama seaside, Brass LGA; construction of drainage at Ayakoro in Ogbia LGA; and the strategic youth empowerment and training program for over 200 youths in Brass, Nembe and Ogbia LGAs, among others.

It was further gathered that the Degi has also sponsored four bills and moved eight motions on the floor of the Senate, including a motion on the dualization of the East-West road, since his election in 2019.

“Sponsored a Bill for an Act to provide for the establishment of a Federal College Of Education Bassambiri, in Nembe LGA of Bayelsa State and the bill has been passed by the 9th Senate of the Federal Republic of Nigeria.

“Sponsored a bill for the construction of Oil and Gas Research Center and a Museum in Oloibiri in Ogbia LGA of Bayelsa State and Mr. President granted it.

“Sponsored a Bill For An Act To Amend The Compulsory, Free Universal Basic Education Act Cap C52, Laws Of The Federation 2010, To Extend The Application Of The Act To All Children Of Senior Secondary School Age.

“Sponsored a Bill For An Act To Provide For The Establishment Of The National Mangrove Management Commission: For The Protection, Restoration And Regulation Of Activities In The Mangrove Ecosystem Of The Nigerian Coastlines; The Study And Practice Of Properly Developing, Utilizing, Managing And Conserving Portions Of Mangrove Settlements Consistent With The Principles Of Sustainable Development Within The Coastal Areas, And Other Allied Matters, 2020.

“Moved a motion for the establishment of Cottage Industries Across the 774 LGAs in Nigeria.

“Moved a motion urging the Federal Govt of Nigeria to classify the Yenegwe-Okaki-Kolo-Nembe-Brass road as a priority project to be completed before the end of 2023.

“Moved a motion for the Immediate Revival Of The Brass LNG Project in Brass Island, Brass LGA of Bayelsa state.

“Moved a motion on the dualization of the East-West Road.

” Sponsored and moved a motion over the Oil Spill at Nembe, in Nembe LGA of Bayelsa. He urged the Federal Government to penalize oil companies responsible for the devastation of host Communities.

” Urgent need to check the operations of container-laden trucks and put in place regulations to secure the lives of road users.

“Urgent need to protect, restore and regulate activities in the mangrove ecosystem of the Nigerian coastlines and properly develop, utilize, manage and conserve portions of mangrove settlements consistent with the principles of sustainable development and environmental preservation.

“Co-sponsored motions with other colleagues.

“Contributed to bills and motions.”

Federal High Court in Abuja gives judgement in favour of Sen. Degi-Eremienyo …Court says all his certificates are genuine and correct