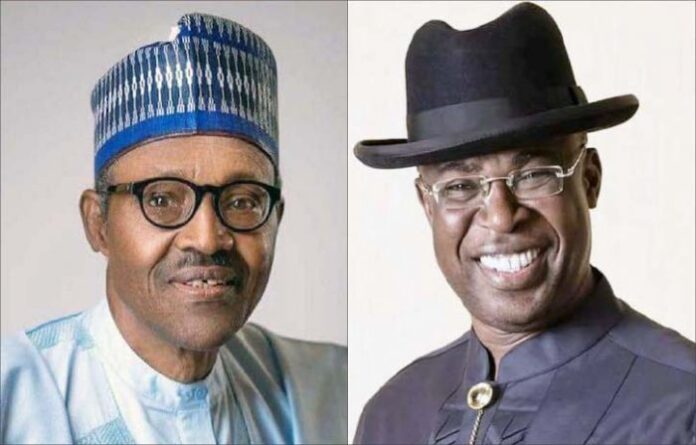 The leadership of the All Progressives Congress (APC) in Bayelsa state has passed a vote of confidence on President Muhammadu Buhari and the Minister of State for Petroleum Resources, Chief Timipre Sylva.

The vote was passed during a stakeholders meeting held on Tuesday at the party secretariat in Yenizue-gene, Yenagoa, the Bayelsa state capital at the instance of the state executive committee.

Chairman of the Extraordinary Caretaker Committee of the party, Mr. Jotham Amos, who raised the motion ,said the duo of president Buhari and Chief Sylva had performed well in discharging their constitutional duties to Nigerians.

He said, “unless you don’t want to see what the president is doing, you will say he is doing nothing. It is the same with the minister. You can see what he is doing in different places.

“That is why we are passing a vote of confidence on the president and the Minister, Chief Timipre Sylva because under them, the country is moving forward.”

The chairman’s motion was overwhelmingly supported by members of the stakeholders meeting who eulogized the president and the minister of state for petrolium resources.

The APC also resolved to set up an Elders Council to work with the state leadership of the party to move APC forward in the state.

The yet to be constituted elders coucil would among other things play an advisory role and reconcile aggrieved members of the party, especially those responsible for the opening of a parallel state secretariat.

Raising the motion for the constitution of the elders council, the lawmaker representing Southern Ijaw Federal Constituency in the National Assembly, Mr. Preye Oseke said if constituted, the elders council in collaboration with the state executive committee would engender unity and cause the party to wax stronger in the state.

Each constituency is to be represented at the proposed elders council while one woman from each local government is to be part of the council.

Members were also advised to imbibe the tenets of internal democracy at the forthcoming APC ward, local and state congresses in the state.

Ekowe Poly staff protest appointment of acting rector, say he does not meet the criteria