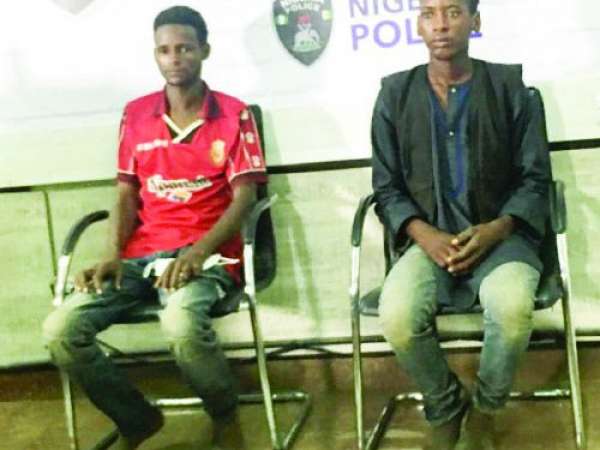 …Narrates how they refused 20,000 Cefas offered them by the American farmer because they wanted dollars

The kidnappers of an American citizen, Philip Nathan, who was abducted from his farmhouse at Nasalata village in Niger Republic on October 21, have revealed how American soldiers swooped on them in a helicopter to rescue their victim in the dead of the night.

The suspects, Aliyu Umar, 23, and Ali Abdulahi, 21, said that they had taken their hostage to a thick forest in Sokoto State, where they kept him for one week and provided 24-hour security to ensure he does not escape when from nowhere an helicopter hovered around where he was kept with white soldiers jumping down and killing all their gang members before taking their victim away without stress.

Aliyu told Sunday Sun in an interview that the whole operation did not last more than five minutes.

He said that he and his colleague Ali Abdulahi escaped being killed by the invading soldiers because they were off duty on the night that the American Seal carried out the operation.

He said that he watched the whole drama from a distance in a house they had taken refuge not too far from the spot they kept their hostage when the helicopter arrived in the area, hovered for sometime before the soldiers jumped out.

The suspect, however, said that he cannot remember the exact time of the night as he and his colleagues were too afraid to go out.

He also said that they did not hear the sound of any gunshot during the operation, but that it was only when they got there in the morning that they met the dead bodies of all their colleagues.

The suspects who are in police custody narrated how they kidnapped the American while he was relaxing in his farmhouse.

According to him, they went in about 12 motorcycles and worked with two other kidnap gangs, making them a total of over 20, that went for the operation.

On getting to the farm, he said that they met the victim who was in his house relaxing on the fateful day and surrounded him.

On sighting them, he said that the American offered to give them 20,000 Cefas, but they rejected the offer and took him away because they wanted their money in dollars.

After rounding him up, he said that they put him in one of the motorcycles with three other people to ensure he does not act funny and rode to the forest in Sokoto, where they have their hideout.

Sunday Sun brings you this interview from the suspect who was paraded by the police in Abuja:

“My name is Aliyu Umar, (aka Kwatte). I am 23 years old and a native of Kalmalu village in Illela Local Government Area of Sokoto State. I belong to a nine-man kidnap gang and I have been in the kidnapping business for sometime now and I have participated in several kidnappings both in Nigeria and Niger Republic. Some members of my gang are from Nigeria, some from Niger and some from Arab countries. I have made plenty of money in the kidnap business, but I cannot stop because there is plenty of money there.

“When we planned to kidnap the American, we decided to hire the services of our other colleagues from another group because we suspect that he may be having some people guarding him. We planned everything very well and rounded him up at his farmhouse. We went in about 12 motorcycles with over 20 of us. When we got there, we found him relaxing in one of his rooms and when he saw us he started pleading with us not to take him away, but we refused. He even offered us 20,000 Cefas, but we rejected the money because that was too small compared to what we were expecting to get from the American government when we kidnap him.

“So, we took him away in one of the motorcycles, two people sat behind him and the driver so that he will not escape because Americans are very smart people. When we took him, we drove for about five hours until we got to the place where we usually keep our hostages. We kept him with us for one good week and my boss made contact with his people who agreed to pay the amount we were asking for. We took good care of him because we needed the money. We carried out shift duties to ensure he does not escape. We took turns in this aspect. But something happened on the night that I was off duty and the whole thing was like a dream because we watched it from a house we live that is not very far from our hostage area. That day in the midnight, I just saw helicopter flying around the area and then after sometime, it started going round and before I knew what was happening, soldiers started jumping out from the helicopter and the soldiers were while men and after sometime, they climbed back into the helicopter and flew away. This whole thing did not last more than five minutes and we did not hear any sound of gunshot. When we saw the soldiers, we were afraid that they were going to kill us so we hid ourselves until in the morning when we did not hear any footstep; we went to see if our colleagues were okay. But on getting there, we found them all dead and when we examined their bodies they were shot and we did not even hear the sound of gunshot. We also did not see our victim again that was when we knew that the white soldiers had taken him and we were afraid and ran away.

“On how he was arrested, he said he was arrested after the police used the telephone number with which they used to negotiate for the ransom for the American to track him.”