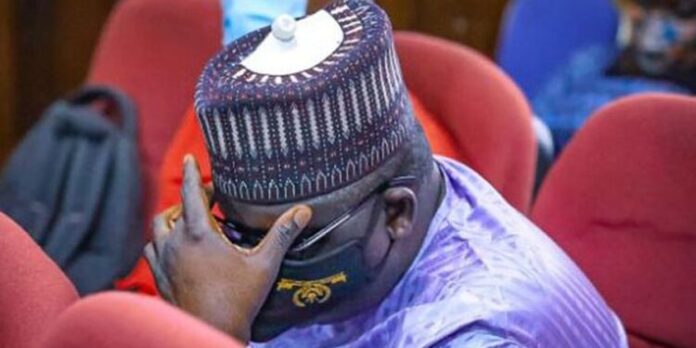 The embattled former chairman of the defunct Pension Reform Task Team, Abdulrasheed Maina has broken his silence after a federal high court in Abuja sentenced his son to 24-years imprisonment on Thursday.

Maina’s son, Faisal was convicted on three-count charge of fraud while sentencing him to 24 years (14 years concurrently) in his absence.

Maina begged the Federal High Court sitting in Abuja to reopen his defense in the money laundering case instituted against him by the Economic and Financial Crimes Commission (EFCC).

The application was announced by Maina’s lawyer, Anayo Adibe on Thursday.

The court had on July 16, closed Faisal’s father’s privilege to call witnesses in the case owing to his absence during proceedings.

The complainant (EFCC) was also done calling its prosecution witnesses.

On that day, a prison warder told the judge that Maina was not in the courtroom but was seated in a van of the Nigeria Correctional Service outside the court because he had knee problems.

But presiding judge Okong Abang had recorded Maina absent, saying that the hearing notice issued to the correctional service was binding on them to produce him during the proceedings.

Recall that Abang had earlier ordered that Maina be remanded in a correctional centre pending the conclusion of his money laundering trial, after faulting him for jumping his first bail and fleeing to Niger Republic.

He was later extradited back to the country by a coordinated security team, after the judge had ordered his arrest while ruling in November 2018 that his trial will continue in absentia.

On Thursday, Maina’s lawyer, Adibe asked trial judge Okong Abang to set aside his order and direct that Maina should enter defense in the case.

“We have a motion dated 6th of August, 2021, the application is seeking for an order of your lordship setting aside the order of foreclosure of the first defendant’s defense made on the 16th of July 2021.

“It is also seeking for your lordship’s order reopening the defendant’s defense in the interest of fair hearing and interest,” he said.

Adibe contended that he was not served with hearing notice for the July 16 proceedings even though another lawyer represented his client.

Maina’s lawyer insisted the trial court did not have jurisdiction in making order foreclosing the right of defendant to call witnesses when he was not in court.

Counsel for the EFCC, Faruk Abdullah opposed the defendant counsel’s prayer on the grounds that he did not appeal the order foreclosing his defense.

Addullah argued that it amounted to abuse of court process for Maina to bring such application to court without appealing previous rulings of the court.

“I urge your lordship to resist the application for lacking in merit and order that the final written addresses of parties be adopted,” he argued.

After hearing their arguments, Abang adjourned the matter to “October 8 for ruling by 10 am.”