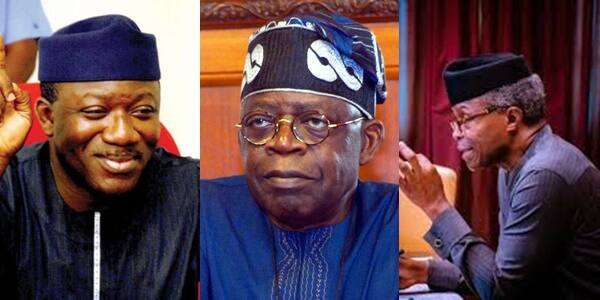 Many pan-Yoruba socio-cultural and political organisations have stated their stance following the declaration, earlier in the week, by a former governor of Lagos State and National Leader of the All Progressives Congress (APC), Asiwaju Bola Ahmed Tinubh, to contest the 2023 presidential poll.

There are also claims in some quarters that pressure is being being mounted on the Vice President, Prof. Yemi Osinbajo, to also publicly declare his own intention.

The groups include Afenifere, Yoruba Council of Elders (YCE), Oodua People’s Congress (OPC), the Agbekoya Farmers Society (AFS), and the apex Yoruba self-determination organisation, Ilana Omo Oodua (IOO). So, if eventually Osinbajo gets to make public his own declaration, which of them, will the Yoruba as represented by these groups support? That was the question that Saturday Sun put to some of their leaders. National Publicity Secretary of Afenifere, Mr. Jare Ajayi, said: “For now, Afenifere does not have a position on any presidential aspirant. Our position is that the 2023 presidency must come to the southern part of Nigeria. The talk on whether we have narrowed it down to any part of Southern Nigeria has not come up at all.”

Secretary-General of YCE, Dr. Kunle Olajide, on his own part, told Saturday Sun, in a phone chat, that both Tinubu and Osinbajo have capacities to govern Nigeria very well. He noted that Tinubu has made his intention known that he would contest for the plum job, while Osinbajo has not made any such declaration. Asked the position of the Yoruba Council of Elders on the duo, he simply said: “It is premature to make comments on whom to support between the two of them. So, let us leave it like that.”

In his contribution to the debate, Mr. Maxwell Adeleye, Communication Secretary, the Ilana Omo Oodua, under the leadership of Prof Banji Akintoye, said that the organisation would not support any presidential aspirant or candidate because it does not believe in the 2023 elections and it does not want it to hold, including the governorship polls in Ekiti and Osun States billed for later in the year. But he was quick to add that the organisation has nothing personal against Tinubu or any other person who wants to contest the 2023 presidential poll.

“Our position is very clear,” he said. “We do not believe in the constitution of Nigeria. We are calling for a sovereign national conference or a transition government that will preside over the conference, and we will discuss on our sovereignty. The Ilana Omo Oouda already said we want to leave Nigeria. So, when we get to the negotiation table, we will discuss how we want to peacefully exit Nigeria. So, we have made it clear that we are not interested in the 2023 elections. In fact, we are starting with Ekiti and Osun governorship elections. We will not participate in any election that will be conducted through the 1999 constitution. It is a rape on our people and a fraud.”

Other groups like Agbekoya Farmers Society (AFS) and Oodua Peoples Congress (OPC) also made their intentions known. While the National Secretary of Agbekoya, Prince Adegbenro Ogunlana, said that the group did not care where the president comes from or who emerges as president as long the current constitution, which he said was foisted on Nigeria by the military, is not reviewed, Publicity Secretary, OPC, Yinka Oguntimehin added that the group’s position on the future of Nigeria is clearly stated in their belief in restructuring. “That is why we root for regionalism as the best option for peace and stability in the polity. Even if an angel emerges the president of this nation today, without restructuring, nothing will change for better.” Former Minister of Works and National Chairman, Southwest Agenda for Tinubu (SWAGA), Senator Dayo Adeyeye said that the 16 All Progressives Congress (APC) governors are solidly behind the presidential aspiration of Tinubu.

He disclosed this in Ado-Ekiti, the Ekiti State capital, on Thursday while inaugurating the parallel APC ward and local executives, adding that they have a keen interest in the actualisation of  his presidential bid. In his view, former chairman of APC in Lagos State, Henry Ajomale, noted that although both have the rights to contest, Tinubu has always nursed the ambition to be president of Nigeria.

“If Osinbajo happens to be Tinubu’s political son and he installed him as the Vice President because he didn’t want to be the Vice President and decided to wait for his turn to run as President, I don’t think there is anything wrong with that. Osinbajo is aware of this right from the beginning.”

The Muslim Rights Concern (MURIC), confirmed its endorsement of Tinubu as a presidential hopeful while noting that it fits into its long-term aspiration of having a Yoruba Muslim rule the country.

“This is the time Yoruba Muslims need the support of their Muslim brethren all over the country to ensure that Tinubu emerges as the candidate of his party at the primaries,” it said in a public statement. “They should also vote for him massively during the presidential elections to ensure that he emerges as the president of Nigeria to be sworn in on 29th May, 2023.”

2023 Presidency: “I would be watching you from afar” – Buhari to Osinbajo, Tinubu, Amaechi, other APC Presidential Aspirant’s