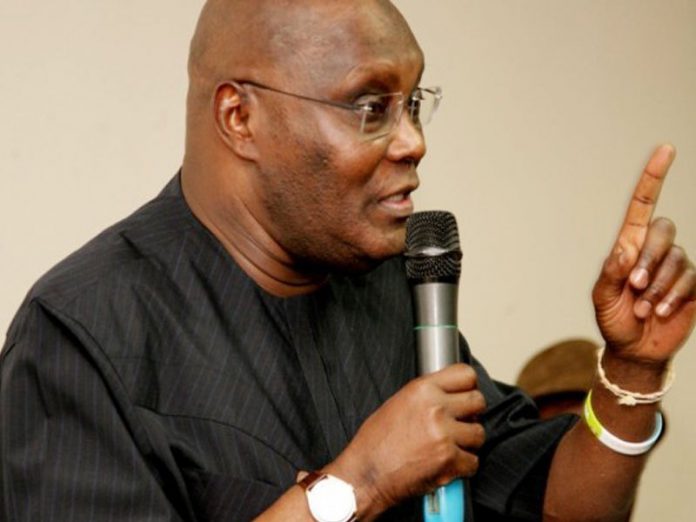 Former spokesman of the Atiku Abubakar Presidential Campaign Organisation in the 2019 elections and ex- Information Commissioner in Edo state, Prince Kassim Afegbua has urged the Peoples Democratic Party, PDP, to look beyond the former Vice President and cede its Presidential ticket to the South ahead of the 2023 general election.

Afegbua who played a prominent role in the crisis that led to the suspension of former PDP national chairman, Prince Uche Secondus also tasked the National Working Committee, NWC of the party led by Senator Iyorchia Ayu to leverage on its good start by going South to get its Presidential flag bearer in the next elections.

Premising his stand on the need for fairness and equity, the PDP chieftain also fingered Atiku’s age as a factor the party should consider, urging it to dump the former Vice President for a much younger candidate.

In a statement entitled, “2023: Atiku and the age of Methusalah politics,” Afegbua warned Atiku to give younger Nigerians a chance lest he wears the tag of “a perpetual or professional candidate.”

The statement read in part, “With the abysmal performance of President Muhammadu Buhari on account of age, incompetence and lack of capacity and political will to take deliberate and sustained action to bail out the country from all manner of challenges, it will be immoral for Alhaji Atiku Abubakar to continue to express interest in seeking election in the 2023 Presidential election having attained the retirement age.

“He cannot assume the role of a perpetual candidate or professional aspirant year in, year out, of the party as though the party was established for him alone. It defeats all sense of logic for such an old man to attempt another round of political contestation at a time the general feeling and mood in the country supports a younger Nigerian from the Southern extraction of the country.

“For me, Alhaji Atiku Abubakar should quit his quest for Presidency and support a Southern Nigerian candidate in the spirit of fairness, equity and justice, that will assuage the feelings of stakeholders from the Southern part of Nigeria. It will be against the run of play and natural justice for any aspirant of Northern extraction to show interest in the 2023 presidential election within the Peoples’ Democratic Party threshold.

“It will offend national sentiments, emotions and logic for anyone from the North to show such interest given our diversities and heterogenous political configurations. Given PDP’s doctrine of political power balancing and fairness, it will be against its own unwritten rule to cede the ticket to any Northern aspirant least of all, Alhaji Atiku Abubakar.

“Having concluded the convention of the Peoples’ Democratic Party, PDP, with a new leadership that looks promising, the Party will have to rise above board to produce a Presidential candidate from the Southern part of the country to complete the narrative.

In a familiar narrative that has seen some PDP stalwarts kicked against Atiku’s interest in the 2023 Presidency, Afegbua argued that the former Vice President abandoned the party shortly after the 2019 elections, as some of its leaders were allegedly persecuted by agents of the ruling party.

He continued: “After the 2019 Presidential election, Alhaji Atiku Abubakar abandoned all of us in Nigeria and sought refuge in far away Dubai, thus exposing us to the intimidations, harassment and threats posed by the desperate All Progressives Congress, APC’s power oligarchs.

“It was a case of a General abandoning his troops in the battle field. Rather than draw strength from his presence, his absence exposed us to all manner of challenges. He was in Dubai and left us to our fate.

“When it mattered most for us to reach out to our candidate for motivation and necessary encouragement, Alhaji Atiku Abubakar vanished to thin air. Knowing full well that political activities were to take off, he suddenly resurfaced and became a frontliner in his quest to fly the party’s flag once again. That, to me, amounts to gross political selfishness and greed, which must not be allowed to flourish in our contemporary engagements. Even those who are promoters-in-chief of Alhaji Atiku’s aspiration, know in their heart of hearts that it is a project that is dead on arrival.”

He further maintained that Southern Nigeria boasts of eminently qualified leaders whose candidacy will give the ruling party a run for their money.

“The Southern geo-political zones of Nigeria have eminently qualified Nigerians and parade great minds who are competent and ready to take a shot at the number one job. Those who are advancing very nebulous theory of seeing the Northern population as a stimulant to win the sympathy of the North against the South are either ignorant of the real demographics or at best, just playing the ostrich.

“No one in the North should take away what belongs to the South. That will be hurting the consciences and feelings of the average Southerner. If the argument is to suffice for example, for an Atiku Presidency, he will be finishing his first term of four years at age 81. And were he to become a candidate in 2023 again, and per adventure he loses the election, are we, as PDP, going to reserve the position for him or any other Northerner in 2027?

“These are very curious scenarios which cannot be overlooked. For 2023, an Atiku candidacy will be like promoting an expired product in the face of very compelling reason to look down South in our quest to wrestle power from the fractured APC.

“Earlier last year, I was conscripted into the Technical Committee for Atiku Presidency. Having attended three meetings of the group, I found my spirit and conscience permanently in conflict with the ethos of justice, fairness and equity, which the south deserves. A Nigerian of Southern extraction deserves to be given unfettered opportunity to represent the party in the 2023 presidential contest.

“Alhaji Atiku Abubakar and his Northern aspirants should support the aspiration of an upwardly mobile and younger elements from the South to fly the PDP flag. Anything short of such will be tantamount to standing logic on its head, and a deliberate attempt to undermine the collective interest and aspirations of the Southern aspirants.

“I will therefore implore the new management and members of the National Executive Committee, NEC of the PDP as well as the National Working Committee to speak with one voice in ensuring that the South is given what is due to it.

“Doing that, will mean promoting the fundamental principles of democracy of all inclusiveness and participation. Let it be known that I will not hesitate to commence the process of mobilizing, sensitizing and conscientizing like minds and team up with other stakeholders to drum up the necessary support that will birth a Southern candidate for the party. Justice should not only be served, it must be seen to have been served.

“Nigerians in their millions are tired of seeing the faces of persons who have dominated the political space in the last forty years and yet, unwilling to take a bow. In the spirit of the new thinking and paradigm shift, please tell them to allow us to breathe,” he added.

2023: Maybe, God Has Said This Is the Right Time for Atiku to Be President, Says Titi Abubakar