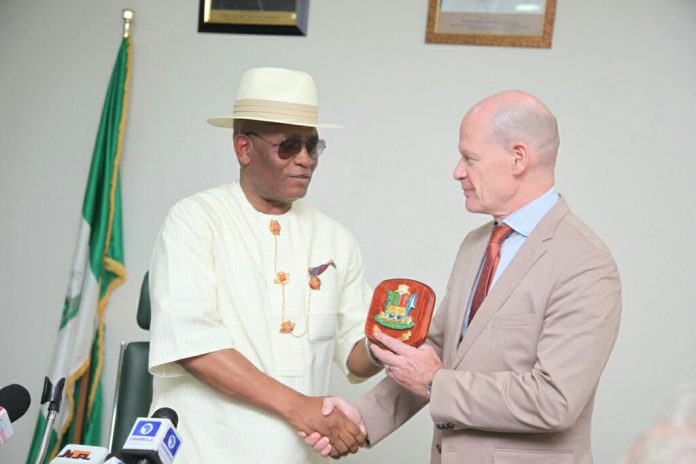 Foreign Countries under the European Union (EU) have Today expressed concern over the conduct of the 2019 elections and the rising cases of killings and violence in some parts of the country including Plateau ,Benue and Taraba states.

Sir Sean Hoy, the Ireland Ambassador to Nigeria, who made this known Today in Yenagoa during a call on the Bayelsa State Deputy Governor, Rear Admiral John Jonah at the Government House, though cases of violence can not be ruled out in the world, the recent cases of killings and violence in some parts of Nigeria is worrisome. 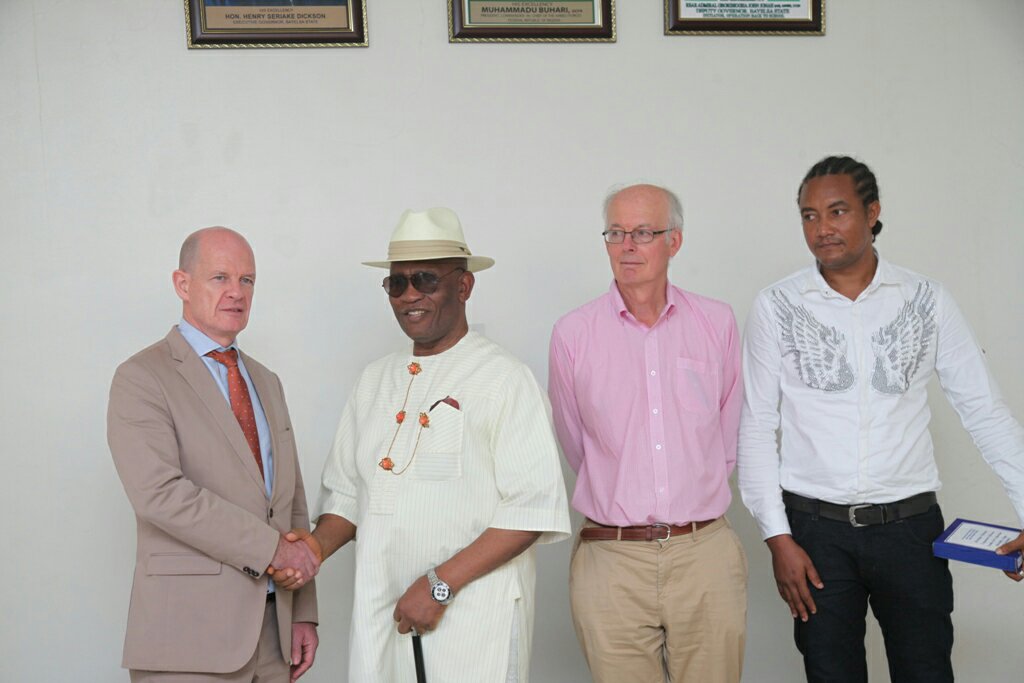 Ambassador Sean Hoy, also revealed that immediate visit of President Muhammad Buhari to plateau state gladden the hearts of leaders of European Union and they have ruled the involvement of Nigerians in the killings.

Hoy said “the international communities, particularly the European Union, are concerned about the killings in the country and also the President of Nigerian has shown concern. I was pleased that President Muhammad Buhari visit Plateau state.”

“We agreed that there would always be violence in the world. But it is our responsibility, as leaders, to do what we can to reduce it and to look at the causes of violence. If it is poverty or it insecurity, we need to find ways to resolve it.”

He noted that the European Union have observed that Nigerians are peace loving people and can not be involved in the killings in order to instigate religious or ethnic violence, ” I think most Nigerians live peacefully. And when such peace is threatened, it is very bad. Now we are seeing, insecurity and other conflicts. And we think those are caused by bandits.” 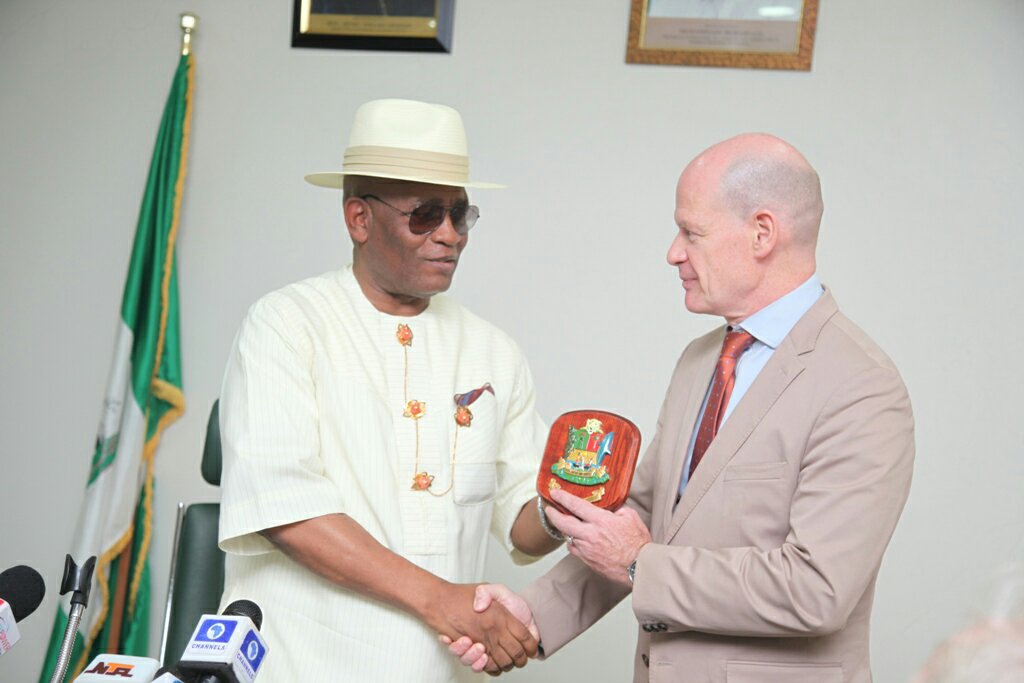 “I don’t believe that the peace loving people of Nigeria are involve in the violence along ethnic and religious grounds. And it is very important that leaders preach peace because Nigerians are peacefully people and have lived together for a long time. Now that Nigerians are being threatened by negative Forces, that is where all of us including world leaders, the Nigerian people and communities have to come together and preach peace. ”

“If people resist violence, it will not succeed, no matter who forced it. On the issue of Politician involvement in killings and violence, we don’t have evidence but also we are members of the international community and can’t comment.”

Earlier in his submission to the Bayelsa Deputy Governor, Rear Admiral John Jonah, Ambassador Hoy noted that the members of the European Union have resolved to offer support to Nigeria for a peaceful conduct of the general election, “we would have to monitor and offer assistance to reduce violence. It is important that Nigeria show example to other African countries with the condition of 2019 election.”

Speaking the Bayelsa State Deputy Governor, Rear Admiral John Jonah said the Restoration administration as we call it, when we came here first thing we declared was zero tolerance on crime and criminality. You know that the fundamental objectives and directive principle of state policy as stated in the constitution demands that the purpose of government is for security and welfare of the people.

“And if you are in government, you must take the security and welfare of the people serious. Even at the United Nations level, when we’re talking of security we emphasise on human security and it involves access to education, health, welfare and all that makes man move on. We have moved from MDGs to SDGs and all these are directed at the developing countries for obvious reasons and in Bayelsa state”

“One of the things that actually affect us most is the environment, arising from the activities of the oil companies. We feel that we are not carried along and if there is contrary observation made by the community, it is blown out of proportion.”

“Yes we are getting something but it is not enough. I’m very happy to see how far you have come but I’m aware of the Alaska model which is kind of what you’re saying where everybody benefits of the dividends of the proceeds of oil exploration.”

“. Already you’re doing it by talking to the oil companies on how we are going to benefit more, the damage to the environment is enormous, you cannot quantify it.”

“For the ECCA that you have established, i will recommend to the governor to get a desk office for you here to collaborate, liaise with you and get direct access to amount of information that you have so that we can also benefit and use it as a basis for projecting our needs.”

“We as a developing country would need partnership in a lot of areas. We have structures in the state now under the ministry of industry to partner with any person that wants to invest. We are trying to establish the deep seaport port facilities that will not only have capacity for ships to berth but capacity for ship construction and ship repairs, if we can partner with some ship dockyards and shipyards in Ireland, we can leverage on the advantage you have to make it easier for us because without totally having the capacity to harvest sources within and around us,”

“Bayelsa state cannot move forward and that is why the governor has decided that we must have access to the sea by way of road construction. At the moment there is no single road in Bayelsa that is open to the sea, the plan of government is to see that at the end of the day we actually hit the sea on three fronts.”

“We have three senatorial districts that have access to the sea, now we’re after the west senatorial district but then the east has a lot of potential. You must’ve heard of Brass LNG, Brass fertilizer company these are also areas that if companies in Ireland are interested in, opportunities abound.”

“We are even expecting the President to do the groundbreaking of the Brass fertilizer before the end of this year. For the state, i can assure you that security is the place where the governor has invested the most although it is intangibleI am not comfortable with the way the international community sees security in the gulf of Guinea, in the level of assistance they’re ready to give.”

“What the governor is trying to do is Bayelsa beyond oil, that requires investment and collaboration with people like you and i hope that at the end of this meeting, we’ll not only look at the talks but also at investment opportunities in this state.”