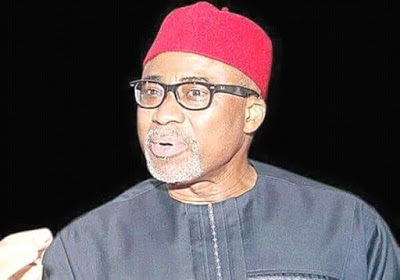 The controversy trailing the 2018 budget may not have abated as the Chairman, Senate Committee on Electricity, Iron, Steel and Meteorology, Senator Eyinaya Abaribe says he would open a can of worms that must have precipitated his arrest when the Senate resumes plenary on Tuesday.

Responding to Sunday Telegraph’s enquiry on the heels of his release last week after spending five days in custody of the Department of State Services (DSS), the Senator representing Abia South in the National Assembly declined comments, but said would keep sealed lips till that day.

Sources close to the Senator, however, said his recent arrest and detention was designed cow because of his protest over unlawful padding of the power budget by N30billion by yet to be identified highly placed person(s) in the Ministry of Power, Works and Housing after its passage by the National Assembly. “In the 2018 Appropriation Act, the National Assembly discovered a disparity to the tune of N30billion in the budget passed by them and the one assented to by the President.

A new item under code 1010927, titled: ‘Expansion and Reinforcement of Infrastructure in 11 Distribution Companies to Reduce Stranded Generation Capacity,’ was noticed by lawmakers,” the source said.

The discovery, our source said, has compelled other committees in both houses to carry out a comparative study of what they approved in the Appropriation Act, and what was contained in the copy signed into law by the President.

“I was when the report was to be made known by Abaribe, Senate Spokesman and his counterpart in the House of Representatives that Abaribe was arrested. “I was there during the arrest. Eight security operatives visited the house; two manned the gates while the other six searched through every document in the house.

We were told they were looking for weapons, but no such was found. “They even saw Mrs. Abaribe marking some school scripts, but they took her laptop computer and examined it for any incriminating content.

But again nothing was found. During his detention, he was given statement sheets on many occasions to see whether he would contradict himself, but he failed to do so,” the source said. The source added that the leadership of the National Assembly which believed the arrest was designed to intimidate the senator also visited the Director of SSS over the matter, to formally lodge a complaint over the matter.

The National Assembly wondered why the executive complained about alteration in the budget because the former introduced 6,403 projects critical infrastructures totaling N578 billion and slicing other allocations, when it inserted new project after its passage.

However, when contacted, Senator Abaribe declined comments on the issue, he rather said he could only speak extensively on it when the National Assembly resumes this week. Responding to the allegation, Special Adviser to the Power, Works and Housing Minister, Mr. Hakeem Bello, said it is illogical for anyone to claim that a new item was introduced into a budget already passed by the National Assembly, just before Mr. President signed it into law. “It is very illogical to make such claim. If anyone injects a new item into the bill before the President signs it into law, will the Ministry of Finance release such fund for it?

I don’t know what they are talking about, and if the Senator wants to open any can of worms, we are waiting to see it,” he said

“Sen. Abaribe Is An Ethnic Bigot and An Elder for Nothing” – Igbokwe to the Nigerian No.1 Senator for wearing the Dot-Nation T-shirt!