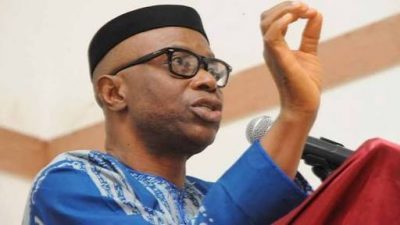 Some aides and associates of a former governor of Ondo State, Dr. Olusegun Mimiko, have expressed their decision to remain in the Peoples Democratic Party despite their leader’s defection from the party.

The politicians, who are mainly former political appointees of the ex-governor, also maintained that they had no intention of following their former boss to the Labour Party.

Mimiko and his teeming supporters across the 18 local government areas of the state on Thursday dumped the PDP for the LP in Ondo town.

Mimiko, who became Ondo State governor in 2009 on the platform of the LP, had left the party for the PDP in 2014 in order to support the ruling party then.

Mimiko’s reasons for his latest defection did not go down well with many of his aides, who vowed to remain in the PDP.

One of the aides, who spoke on condition of anonymity, told our correspondent that he would not leave certainty for uncertainty.

He argued that it was not the best time for Mimiko to leave the PDP, stressing that the reasons given by the former governor for dumping the main opposition party in the country were not cogent.

The former aide said, “He (Mimiko) is my leader. There is no doubt about that. And I have been following him for many years but this time, I won’t go with him because I don’t see any sense in his defection to the LP. I, however, wish him good luck.”

Faboyede, who served under Mimiko as a commissioner for eight years, said he would not leave the PDP because the party was daily gaining acceptability from the electorate.

He also said Mimiko’s exit would not have any negative impact on the party, because “with or without Mimiko, the PDP will take over the state in the next election.”

He added, “Mimiko is a human being. He has the right to his opinion. We have tried at all levels to discourage him but he insisted on leaving. One thing I know is that PDP will not die as he leaves.

“We have survived many turbulent times in the past, so if he goes, it cannot affect us negatively.”

When asked whether he would follow his former boss to the LP, Jegede simply said, “I am a member of the PDP.”

Another aide of the former governor, who was chairman of the Ese-Odo Local Government Area of the state, Mr. Kennedy Peretei, said the LP had been buried in the state and would never resurrect again.

Peretei, who is aspiring to contest the Ilaje Ese-Odo Federal Constituency seat in the 2019 general elections, said, “We have since buried the LP in this state and we have even poured acid on the carcass; so there is no way it can rise again.

“With due respect to my boss (Mimiko), if he still believes in the LP, I wish him well. I don’t know if the LP can fly in any local government but definitely not in the Ese-Odo and Ilaje local government areas.”