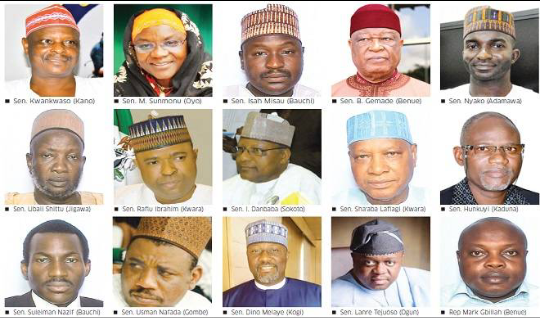 #NaijaLiveTv
Saraki and Speaker Yakubu Dogara are delaying their defection to the Peoples Democratic Party (PDP) to guard their positions and make a big impact when they quit the ruling party, sources told Daily Trust last night.

Some henchmen of Saraki and Dogara defected from the All Progressives Congress (APC) to the PDP yesterday.

In the Senate, 14 senators left APC. While 12 joined the PDP, two others joined the African Democratic Congress (ADC).

With this, the APC has slim majority with 53 senators, while the PDP has 50. ADC and the All Progressives Grand Alliance (APGA) have two senators each, bringing the total to 107 senators. Two seat are vacant in Bauchi and Katsina states following the demise of Senators Ali Wakili and Mustapha Bukar respectively.

One of the senators initially listed among defectors to PDP, Adesoji Rilwan Akanbi (Oyo State), later told journalists that he remains a bonafide member of the APC.

In the House of Representatives, 37 lawmakers of the APC left the party, with 32 joining the PDP, and four from Oyo State joining the ADC.

Meanwhile, House Leader Femi Gbajabiamila told journalists that the defected members were in desperate search for tickets for the 2019 general election.

All the lawmakers from Kwara State and a few loyalists to Dogara from Bauchi State have joined the PDP, the two leaders are delaying their defection to create a bigger impact.

One of the sources said, “For now, Saraki and Dogara are closely watching how the events of yesterday would be responded to by the Presidency, other power brokers and Nigerians. However, I want to assure you that many PDP legislators would defect to APC soon.

“But one thing is certain, the two principal officers are already out of the APC, I can assure you that in the coming days, they would move to the PDP alongside some governors, more senators and Rep members just the way we would receive some, so it is not yet over,” he said.

He said for now, it is certain that Governors Abdulfatah Ahmed (Kwara) and Samuel Ortom (Benue) would defect to the PDP but expressed doubts on where Aminu Tambuwal (Sokoto) stands.

According to him, “If you remember, some APC governors led by Abdulaziz Yari and Kashim Shettima had met with Tambuwal in Sokoto. They actually cautioned him against moving to the PDP because he would not get what he wants, which is the presidential ticket; I think he agreed.”

Another source said there is a marked difference between the defections of nPDP in 2015 and what happened yesterday.

“All those that defected yesterday were much stronger and influential politically in 2015. With the exception of Saraki, many of them have lost out in their states,” he said.

A source in PDP told Daily Trust in a telephone interview that Saraki and Dogara will leave very soon.

“It won’t be long at all. Saraki and Dogara are principal officers in the National ‎Assembly so they don’t want to rock the boat yet. The two officers are like shepherd. ‎They can’t stay behind when the flock is gone. So the defection is going to be holistic; they are already half-way into the PDP, there is no two ways about it,” he said.

Different sources told our correspondents that the police invitation to Saraki and the siege laid to the residence of Deputy Senate President Ike Ekweremadu was to ensure a change of leadership in the Senate.

It was learnt that some APC senators that were in the picture of the planned leadership change in the Senate gathered in a hotel in Abuja to be conveyed to the National Assembly after the ploy to keep both Saraki and Ekweremadu away from the federal legislature succeeded.

Consequently, both chambers proceeded on annual recess, which was initially slated for Thursday. They are to reconvene on September 25 when most of the parties’ primaries may have been concluded, according to the INEC timetable.

#NaijaLiveTv Gathered that Saraki had to sneak into the National Assembly early in the morning before the arrival of policemen to his Maitama residence in Abuja.

As at 7:30.am, some of his aides reported that his house was under siege, however when our correspondent arrived at the residence at about 8.am, no security man was seen around the place as only few vehicles were parked outside with few people carrying out their normal activities.

APC senators said they still maintain the majority in the Senate and expect some PDP lawmakers to join them soon.

Senate Leader Ahmad Lawan told journalists after a meeting of the APC caucus that even some of the APC senators that joined PDP would eventually return.

“We’re going to liaise with our leaders to bring back some of our colleagues that have left. Despite the fact that they left, the APC still maintains the majority. APC has 53, PDP has 49, ADC three, APGA has two and there are two deceased lawmakers. The APC will win the two vacant seats.

“The APC government is doing well and Mr President is doing his best for the country. APC remains the majority party in the Senate.”

It was learnt that there would be a couple of cross-carpeting across the two major political parties in the Senate in the coming days.

The APC, in a statement by its National Publicity Secretary, Malam Bolaji Abdullahi, urged members to remain calm as it worked hard to position the party ‘strongly’ for the next general elections, adding that the government had continued to work hard to deliver on promises to Nigerians.

“APC remains in firm control of 25 states of the 36 states of the federation and maintains a clear majority in the federal House of Representatives and state assemblies.

“We assure members and supporters that our great party will continue to consolidate on our majority status in the lead up to the 2019 General Elections, even as our government continues to work hard to deliver on our promises to Nigerians,” the statement said.

The PDP on its part said the defection of 15 ‎serving and 37 House of Representatives members showed that the ruling party is a sinking ship.

“We thank all the senators and we assure them of cooperation within the PDP. The situation as we have today (yesterday), has clearly shown to the entire world that the government of President Buhari has been abandoned by Nigerians.”

#NaijaLiveTv Gathered last night that governors elected on the platform of the APC would converge in Abuja to come up with a strategy that would counter the defections in the National Assembly.

The APC control 24 of the 36 states in the federation, including Ekiti that it won last week.

A source at the APC national secretariat, said: “More than 20 governors would attend and they have a strong agenda which is to ensure that there would be no ripple effects in the states where we all know the bulk of the problem lies.

“And you know what governors can do; they are all out to fight back because the fight is mostly at the state level; Buhari will definitely defeat whoever the PDP would field as candidate.

“But most importantly, we are not losing sleep because all those that left for the PDP would meet a worst scenario there; there are people who suffered for the PDP and would not agree to be dislodged.

I wish them the best – Buhari

President Muhammadu Buhari said yesterday in a statement: “I wish all of our party members who today defected, the very best in their future undertakings. The APC has done its best to stop the defections, and I must commend the party leadership for working tirelessly to unite the party and position it for future victory.

“I am confident that no harm or injury will be done by these defections, to the APC and its aspirations. I urge party faithful to not despair, but to instead see this as something that happens in seasons like this, on the eve of elections.

“As the saying goes, all politics is local. We understand that some of the Distinguished and Honourable lawmakers have issues in/with their home states, especially on zoning which bars some of them from seeking another term in their constituencies.

“Let me also note that none of the defecting federal lawmakers has any specific grievances against me or the government I lead; neither do I harbour any ill-feeling towards any of them. I fully respect their freedom to choose what party to associate with.”