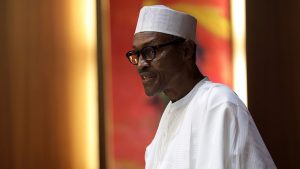 Paramount Ruler of Ogbia Kingdom in Bayelsa State , King Dumaro Charles Owaba has offered insight into the reasons why the people of the six states of the Niger Delta region are not happy with the administration of President Muhammad Buhari, saying the people of the region felt short-changed over the years particularly under the present administration.

King Dumaro Charles Owaba, whose domain house the Oloibiri community where crude oil was discovered in commercial quantity and Otuoke Community where the former President, Dr. Goodluck Jonathan hails from, however suggested that President Buhari can win back the trust of the region by sincerely ensure equitable development and increase in sharing of oil revenue to the region.

The paramount Ruler of Ogbia Kingdom, King Dumaro Charles Owaba, who made this known during the reception and award ceremony organized by the people of Ogbia,Akassa and Nembe clans of Bayelsa State in honour of the National Vice-President 2 of the INC, Chief Nengi James-Eriworio and the National Legal Adviser, Mrs. Bomo Tom’s Fetefigi-Obhe.

King Dumaro Charles Owaba, who was the chairman of the occasion, said the Niger Delta region, particularly the ijaw had been unmined in the nation’s polity. And God made the resources available to the region. The region’s resources is the one feeding the nation. So that we can use the resources to help our people. But since 1956 when our resources was discovered in Ogbia kingdom, it is a pity that we have not been made to realize the effect of our resources that God has given to us.”

“Now that we have spread to other region. Because the Federal Government is not carrying the Niger Delta people along , militancy  and violent struggle came up to oppose  the oppression of Government. The fight against the oppression has come a long way.Isaac Boro fought the fight and Late Melford Okilo moved the motion against our under development of the Ijaw people. But others did not align with him. The fight to free the region is not today.”

“Now that we have Ijaw National Congress (INC), they will carry on the struggle. They are also aware that the Ijaws are an independent tribe. If the Government will discuss with us and give us a higher per cent age in revenue, we will work with the Federal Government.”

Earlier in his speech, President of the Ijaw National Congress (INC), Professor Benjamin Okaba hinted that he failure of President Muhammadu Buhari to meet the demands tabled before him by Ijaw leaders during their last meeting in Abuja may lead to the declaration of a Republic by the Ijaw Nation.

According to Okaba, though the final ratification on the declaration of the Ijaw Republic depend on the outcome of the a proposed all Ijaw Elders’ conference, the demands before President Buhari include issues of true federalism, resources control and self-determination.

Okaba, while relieving the meeting between the Ijaw Elders and President Muhammadu Buhari at Aso Rock, said when the delegation of Ijaw leaders sat with President, “We looked at him eye ball to eyeball and told him that if he does not meet out demands, we will declare a Republic.”

He however noted that despite the peaceful and cordial discussion with President Buhari, there are indications that some political elements are being used to divide the Ijaw Nation and derail the united position of the Ijaw ethnic nationality.

Okaba warned those behind the anti-Ijaw nation to desist and stop comparing the Ijaw Nation to the Oduduwa and the Indigenous People of Biafra (IPOB), “There is no room for further neo-colonialism. It either we are answered or we are moving out.”

“Even when we are crying that the PIB is against us, the government is against us. We have also heard that the water resources bill is coming back. In fact they want to take over our waters, land and our lives.”

He also pointed out that the final decision by the Ijaws on the declaration of Ijaw Republic will be taken after the proposed Ijaw summit to be attended by Traditional Rulers, activists, political leaders and other stakeholders in Ijaw Nation.