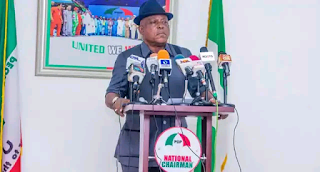 Prince Uche Secondus may be working with some amateur legal advisers, who do not know their right from wrong. Or maybe, they are deliberately misleading him in order to fleece him of some of the money he himself extorted from some PDP aspirants since he assumed office.

For the avoidance of doubt, Uche Secondus is gone forever as the National Chairman of the PDP. The latest injunction he hurriedly obtained from the Kebbi High court is nothing but judicial comedy of error.

The fact speaks for itself as thus that, Kebbi High Court, where he went to get abracadabra injunction cannot vacate the Rivers high court ruling.

It is only the court (Rivers High Court) that restrained him that can also vacate the ruling, except he proceeds to appeal court.

You can remember that on Thursday, the National Working Committee (NWC) of the PDP met with the BOT, where they deliberated on the way forward for the party, and in the same vein, the Board of Trustees including the Former Vice President, Alhaji Atiku Abubakar, Rivers State Governor, Nyesom Wike, Senator Bukola Saraki and host of other leaders and Stakeholders met to discuss a way forward for the party.

A decision has already been reached to close ranks at the NWC level, which Prompted the emergence of Elder Yemi Akinwonmi as the Interim National Chairman. Although, the man is trying to recuperate from his health challenge.

Elder Yemi said that he is a man of peace, who is not on any side, but is focused on anything that will ensure a smooth recovery of the party and make it emerge stronger that before. However, it appeared that when Akinwonmi initially resumed, he hasn’t gotten his act right which made him to issued a press statement postponing the already fixed NWC meeting indefinitely.

Things took a new dimension when Senator Nazif also laid claim to the same position as the Interim National Chairman, but elders and stakeholders of the party waded into the matter immediately, to stop what could have further divide the party.

Some observers noted that Akinwonmi initially wanted to tilt to the side of some pro-Secondus forces within the party saying he is working for Fayose and Adebutu camp, who almost destroyed PDP in South West, but, he quickly retraced his steps, seeing that doing so could be lethargic for him in the end, which made him to now take a neutral position.

To assure stakeholders of his neutrality, a meeting of all NWC stakeholders was called, having both himself and Senator Nazif in attendance, and Yemi Akinwonmi was affirmed as the Acting leader.

Immediately he was affirmed, he announced that the scheduled NEC meeting, which was originally slated for Friday will now hold on Saturday, while the PDP Governors Forum will have their own meeting on Friday, just a day ahead of the NEC meeting in Abuja.

To affirm his loyalty further to the PDP, Elder Yemi Akinwonmi also announced that the National Convention where new National Working Committee (NWC) members, who will pilot the affairs of the party will take place in October as planned.

The fate of Secondus is still hanging in the balance as we speak because, the injunction he procured from Kebbi court holds no water and cannot upturn the present arrangement being put in place by the Akinwonmi led NWC.

Secondus is facing series of challenges, including the allegation of embezzling party’s funds, where a member Kazim Afegbua has petitioned the EFCC over the matter.

He has been suspended indefinitely by his ward excos, which is a decision no court can upturn, because that will amount to judicial violence against PDP’s constitution.

On Wednesday evening, news began to filter that Mr. Secondus and his backers were making moves to procure an injunction from Nasarawa court, this was carried by *The Daily New*, however it seem the quick expose made him and his backers to proceed to Kebbi court in order to quickly find a way to stop the plans of the PDP leaders, wanting to ensure that peace returned and remain with the party.

The reality and fact on ground is that Kebbi High Court cannot vacate the Rivers High Court order, which has exposed and led Secondus to a fatal judicial limbo.

If truly the court order holds water, Secondus will be expected to chair the NEC on Saturday but another allegation is hanging upon his head by PDP women in his State, they accused him of working for the APC, in order to distabilize PDP.

The latest move by Mr. Secondus, of rushing to Kebbi court, could however lay a credence to the allegation of Rivers PDP women, because the party is already heading for a peaceful resolution of its crisis, but his actions may be targeted at stopping the party’s progress.