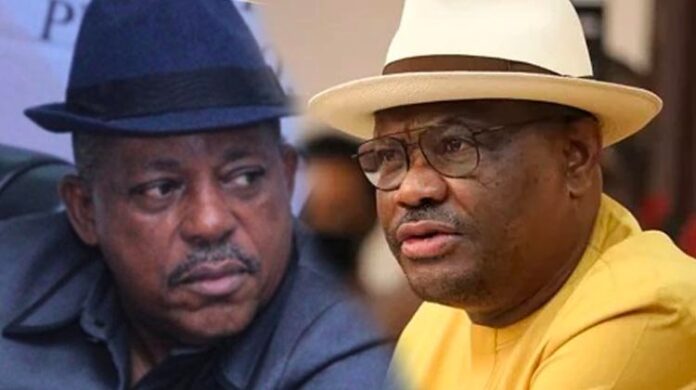 The Rivers State Governor, Nyesom Wike, has said he will not withdraw the lawsuits against the National Chairman of the Peoples Democratic Party, Uche Secondus, because he does not trust the chairman to honour agreements.

NAIJA LIVE TV gathered that Wike said this in a meeting with the Senator David Mark-led committee set up by the PDP National Executive Committee to resolve the party’s crisis.

The bid by Secondus to seek re-election and the determination of the Rivers State governor to stop him is reported to be the genesis of the crisis.

The Mark-led panel had met with Secondus and Wike with a proposal that they both withdraw pending lawsuits to pave the way for the peaceful resolution of the crisis.

While Secondus agreed to withdraw on the condition that the other party does the same, Wike insisted on going ahead with his.

The report submitted by the Mark-led committee quoted Wike as insisting that the “court cases instituted would not be withdrawn because of the lack of confidence in the other party to keep agreements”.

This was contained in the report submitted by the committee to the party’s NEC at its 93rd meeting in Abuja, on Thursday.

Excerpts of the report obtained by NAIJA LIVE TV revealed that both Wike and Secondus agreed that the Secondus-led NWC should serve out its term.

Wike, however, gave the condition that the chairman must commit not to remain in office beyond December 9, when his tenure officially ends.

It was also agreed that the national convention slated for October 30 and 31, 2021, be allowed to proceed without any of the parties taking any action or inaction capable of derailing it including litigation.

While the panel urged both parties to withdraw all pending litigation, Secondus was said to have agreed under the condition that Wike and his group do the same.

However, the report claimed Wike insisted on going ahead with the case in court because of his lack of confidence in Secondus honouring agreements.

A Rivers State High Court sitting in Port Harcourt had granted an interim injunction restraining Secondus from parading himself as the national chairman.

As a result of the order, the PDP Deputy National Chairman (South), Yemi Akinwonmi, assumed office as acting national chairman.

His appointment was ratified by relevant organs of the party including the party caucus, Governors Forum and Board of Trustees.

A few days later, a Kebbi State High Court, granted an interim order asking Secondus to resume office and carry out his duties as national chairman immediately until the determination of the substantive suit.

Just as Secondus assumed office in honour of the order, a Cross River State High Court in Calabar, granted another restraining order barring him from performing the functions of the national chairman.

Amid these, the party’s NEC at its 92nd meeting set up an eight-member committee headed by a former Senate President, David Mark, to find a solution to the dispute.

After meeting with the parties involved in the dispute and reviewing the issues involved, it recommended, among other things, that “the party appoints a convention committee that should take over the responsibilities of organising the national convention as soon as possible; that the handing over after the convention could be delayed until December 9, 2021, to enable the current NWC to serve out its term; that those beating the drums of war behind the scene are urged to stop beating the drums; that the Governors Forum should point the way forward and that there is the need for the governors to continue to be united.

The PUNCH had also reported that a Rivers State High Court in Port Harcourt on Friday granted a perpetual injunction restraining Secondus from parading himself as national chairman.

Counsel to the PDP, Secondus and his legal team have filed an appeal against the initial restraining order, the outcome of which is still being awaited.

Meanwhile, the Chairman of the PDP Convention Committee and Adamawa State Governor, Ahmadu Fintiri, says his party has done better in the management of its internal crisis than the All Progressives Congress.

Fintiri said this on Saturday on his return to Yola from the National Executive Committee meeting of the PDP in Abuja, where was sworn in as the Chairman of the PDP Convention Committee.

He said Nigerians expected the PDP to field an intelligent and vibrant presidential candidate come 2023, adding his party would get its convention right.

Fintiri said, “The PDP has proven itself to be successful in dealing with crisis because of the ingenuity of the people in the party, having had experience in the past. It is the only party that has institutional capacity that is functioning and working. The National Working Committee is working; the Board of Trustees is working; the PDP Governors’ Forum is working; former governors, former ministers and elders of the party are giving their own advice, sharing and bringing their own experiences also on board. Collectively, we are succeeding because of this internal crisis management mechanism, which is functional and working,” he said.

Making a reference to the removal of Uche Secondus as the PDP National Chairman, Fintiri said, “No victor and no vanguished.

“From the way we have always been settling our crisis there has never been a winner. It has always been no victor, no vanguished. A win-win for all our members because we are equal and we respect ourselves.”

He, however, described the task before the convention committee as onerous,  “because Nigerians are looking to the PDP to give them an intelligent and vibrant president, under the party’s platform come 2023.”