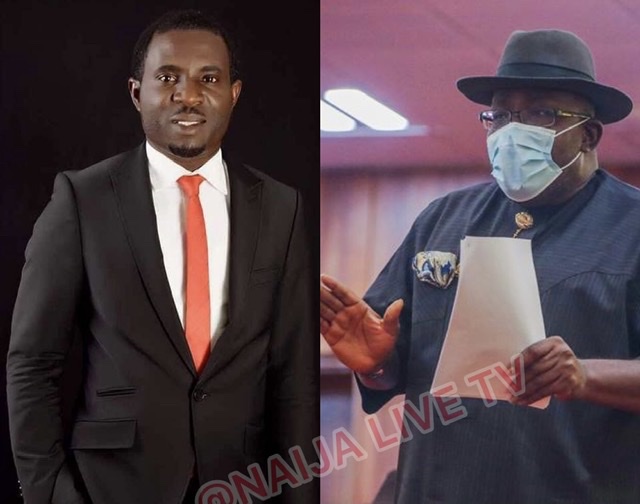 Former Spokesman of the Ijaw Youth Council Barr. Owoupele Jeremiah has called on Sagbama brothers and sisters to reciprocate by supporting an Ekeremor son or daughter as the Next Senator of the Bayelsa west senatorial district.

The Former IYC Spokesman Stated this in a statement sent to NAIJA LIVE TV on Sunday (today) that, the people of Ekeremor LGA had displayed great respect for zoning accord of the Senate seat in the past and also given massive support to the Sagbama candidate in the last election.

Barr. Owoupele who is also an indigene of Angalabiri community in Sagbama LGA further stated that the victory that usher in the incumbent Senator Seriake Dickson could not have been possible without respect for the accord by leaders of both LGA’s

The Statement read in full;
“This statement has become very necessary given the many interpretations and counter interpretations on my position as well is the general perception in relation to the west senatorial seat.”

“Let me place it on record that I campaigned vigorously on the strength of an undisputed zoning arrangement in which the people of west senatorial district willingly created for themselves , a social contract and reaffirmed same very recently under the distinguished leadership of His Excellency Rt hon Peremobowei Ebebi”

“Therefore given my penchant and unrepentant position on ethical values and respect for agreement, I Bar JP Owoupele, leader of the Palace and former Spokesman of the revered Ijaw Youth council hereby unequivocally endorse and affirm the ZONING”

“In this regard, credible candidates from Ekeremor is hereby encouraged to be ready to put forward their names for consideration for the Senate seat”

“The people of Ekeremor had showed great respect for this accord and gave massive support to the Sagbama candidate in the last election, a feat that led to the defeat of the APC candidate even in his home community”

“This victory could not have been possible but for the accord. I respectfully urge all our Sagbama brothers and sisters to reciprocate this dispassionate action and act alike in supporting an Ekeremor son or daughter as the Next Senator”

“While I agree that the position constitutionally affords all qualified characters to vie , it is respectfully submitted that given our age long resolve such an action will be counter productive amoral and will have the full resistance of the people and the land against such a person”

“It is on record that we have enjoyed this arrangement and has always been a people who showed great unity and love within the two local government areas, hence I implore , encourage and appeal to all to remain committed to this remarkable course”

“Why I distance myself From Gov. Douye Diri administration” – Ex-Gov. Dickson