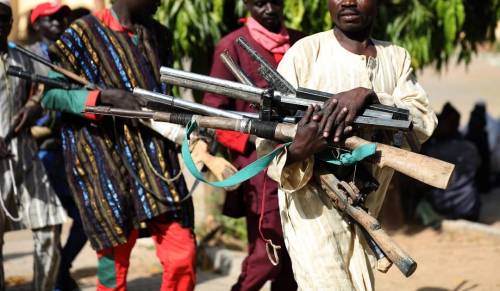 The Katsina State Police Command has arrested a father, Haruna Yusuf, and two of his sons for their alleged involvement in banditry and sale of sophisticated dangerous weapons in the Kaita Local Government Area of the state.

Yusuf confessed to the police that he and his sons had sold over “10,000 arms and ammunition to bandits in the forest.”

Yusuf and his two sons; Shuaibu Haruna and Murtala Haruna, were among 16 suspects paraded by the police on Monday at the Katsina command headquarters for alleged banditry and supply of weapons to bandits.

The police recovered two General Purpose Machine Guns, one LAR rifle, and 200 pieces of anti-aircraft ammunition from the suspects.

Yusuf, 47, with his sons; 18-year-old Shuaibu and Murtala; 20, lived and allegedly perpetrated their criminal activities in Sawarya village of the Kaita LGA.

The Katsina State Commissioner of Police, Sanusi Buba, who briefed the press during the parade of the suspects and the display of the recovered items, did not reveal when the suspects were arrested.

The commissioner, however, attributed the arrest and the recovery of the items to “credible intelligence”.

He explained, “Based on credible intelligence, the command has been following a lead, one Lawan Zayyana, 35, of Muduru village, Mani Local Government Area of Katsina State, a notorious bandit and arms and ammunition supplier to bandits in the forest.

“In the course of the investigation, the suspect was trailed and arrested after a serious gun battle which led to the arrest of his cohorts.

“Consequently, Haruna Yusuf confessed to being the gang leader as he usually received the supply of arms and ammunition from Niger Republic and handed over to Lawan Zayyana, Haruna Adamu, and Auwal Abubakar who would, in turn, take the supply to bandits in the forest.

“He confessed to having sold over 10,000 arms and ammunition to bandits in the forest.”