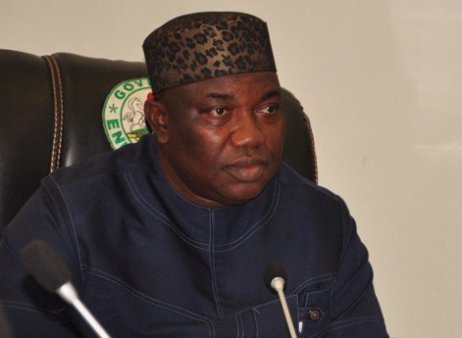 Governor Ifeanyi Ugwuanyi of Enugu State on Saturday disclosed that his administration paid the salaries of workers for the month of June without receiving the federal allocation.

Gov. Ugwuanyi added that despite the fact that he assumed office at the time the nation’s economy was in severe recession, his administration had been regular in payment of workers’ salaries, even when 27 states could not pay.

Speaking during an endorsement rally for his re-election in 2019 by the people of the “Ancient Opi N’Ato Kingdom” in Opi, Nsukka Local Government Area, Gov. Ugwuanyi attributed the successes recorded by his administration, in spite of the nation’s economic challenges, to God’s grace and the state government’s commitment to the wellbeing of the people of the state.

Recall that the monthly meeting of Federation Account Allocation Committee (FAAC) on Wednesday, where allocations for the month of June 2018 was to be shared among the federal, states and local governments, ended in deadlock.

Speaking further, Gov. Ugwuanyi, who was overwhelmed by the large turnout of people at the colourful rally, reassured that his administration will under all circumstances continue to cater for the people of the state and initiate programmes that would address their needs, saying: “since we handed Enugu State into the hands of God, we can see His hands in all we do”.

The governor thanked the people of the area for their support, solidarity and endorsement, urging them to embrace peace and unity for rapid development. He stressed that “what is paramount to us is good governance and development of the rural areas”.

Earlier in his welcome address, the President-General of Federated Opi Town Union, Dr. Sam Ugwuoti, commended Gov. Ugwuanyi for his good works across the state, especially “the beautification and rehabilitation of the Opi – Nsukka road into a modern and beautiful dual-carriageway with street lights”.

Dr. Ugwuoti assured the governor that the people of Opi “will continue to support you” and “assure you unreservedly that come 2019 God will still keep you there in your seat as the Governor of Enugu State to continue to shepherd the people of God”.

“Your Excellency, we assure you of our votes. Everybody here has a PVC. We shall vote for you and your team. We shall return you to the Lion Building to continue to do good”, they declared.