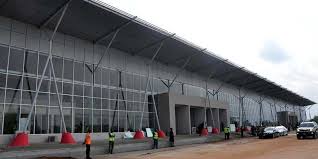 The Deputy President of the Senate, Senator Ike Ekweremadu, has assured that the South East federal lawmakers and the National Assembly remained committed to the early completion of the Akanu Ibiam International Airport, Enugu.

Ekweremadu, who expressed disappointment over the cut in the budgetary allocation to the project in the 2018 Appropriation Act from N2 billion to N500 million, however described as unfortunate the attempts by some persons to play politics with the development by insinuating that he or the South East lawmakers slash the budget proposal for the project, especially when budgetary cuts affected other geopolitical zones.

He said his investigation showed that the cuts took place at the Committees level and hopefully the affected Committees would have explanations to make when the National Assembly resumes.

The lawmaker explained that it would be unfair to expect him to monitor the activities of the over 60 Committees of the Senate and 100 Committees in the House of Representatives unless his attention was called to any challenges.

“The Committees of the National Assembly are usually given a free hand to do their jobs, but they are structured in a way that every geopolitical zone is represented. That way, they can call the attention of the principal officer from their zone when any challenges arise.

“But in this case, the South East holds the positions of Vice Chairman of the House and Senate Committees on Appropriation and also chairs the House Committee on Aviation. Unfortunately, unlike in the case of Committee on Works where my attention was called to the challenges in appropriations, award, and funding of major road projects and I made my modest interventions to resolve the issues, nobody informed me of any challenges concerning budgetary provisions for the Akanu Ibiam Airport”, he explained.

He, however, observed that the quest for a befitting international airport for the South East had been a daunting challenge, pointing out that the government did not release the N2 billion approved by the National Assembly in the 2017 budget for the terminal building at the Enugu Airport.

He said: “It is easily recalled that successive military and civilian governments refused to designate an international airport in the South East, despite endless promises. When I emerged as the Deputy President of the Senate in 2007, and with the support of other South East leaders and people, I led a delegation of South East Senators to see the late President Umar Yar’Adua over the matter.

“President Yar’Adua directed the Minister of Transport at the time, Mrs. Diezani Alison-Madueke, to designate the Akanu Ibiam Aiport an international facility in November 2007.

“Despite this magnanimity, the contract for the facility upgrade was not awarded even when all due process procurement activities had been completed with a due process certificate issued on December 1, 2008.

“In the 2009 Federal budget, the FG made a provision of N1billion for the upgrading of facilities at the airport. But we, members of the Enugu State caucus of the National Assembly, additionally appropriated the sum of N2 billion meant for constituency projects in our constituencies to the airport upgrade. Yet, the contract was stalled, leading to my protest letter to the late President Yar’Adua dated March 20, 2009 and the contract was eventually awarded.

The Senator also noted that the Federal Government did not include the Enugu Airport or South East in the Chinese loan for airport upgrades as other international airports in Lagos, Port Harcourt, Kano, and Abuja.

“We have continued to make case for the airport. The Minister of Aviation was in Enugu to see the airport. The Aviation Committees of the Senate and House of Representatives visited to see things for themselves. The issue was presented to the President when I led South East Senators to see him in 2017. It was raised in the meeting between the President and South East leaders October 13, 2017.

“Unfortunately, the sum of N2 billion approved for the construction of terminal building at the airport in the 2017 budget was not released.

“However, I am happy that the President has indicated that he would send a Supplementary Appropriation Bill. We will work with our colleagues from other zones to ensure adequate provisions for the airport. Hopefully, the government will now release the money this time, unlike the N2 billion in the 2017 budget when it did not release the funds”, he added.

Ekweremadu also urged the Federal Government to release the already approved N500 million so that work could continue in earnest.