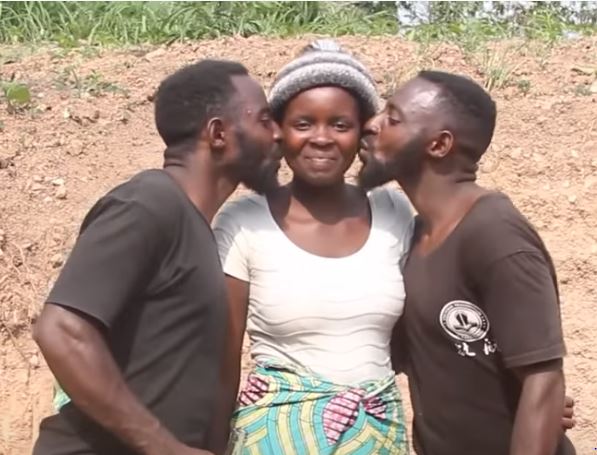 A Rwandan woman identified as Marie Josiane from Rwanda has married two brothers who are identical twins.

The young lady revealed that she first dated the elder twin who did not disclose that he had an identical brother.

In a video shared by Afrimax TV, Marie said had never seen them together. However, on one faithful day she met, hugged and kissed the other brother without knowing that he was not the one she was dating.

The second twin then fell for her, but when they all realised what had happened, they chose to happily be in an polyandrous relationship.

The woman also revealed that hate or envy does not exist between the two brothers due to the fact that they are both married to one woman.

The three have been staying together for the past two years and counting.

The twin brothers say due to the nature of their marriage, people say a lot of things but they always turn a deaf ear because they ae happy sharing her.
They are expecting their first born soon.

Please Impregnate Me, I Will Put The Baby On My Husband’s Head – Housewife Begged Her Boyfriend

Man who accused his pastor of snatching his wife of 12 years finds love again in barely 2 months, set to tie the knot...