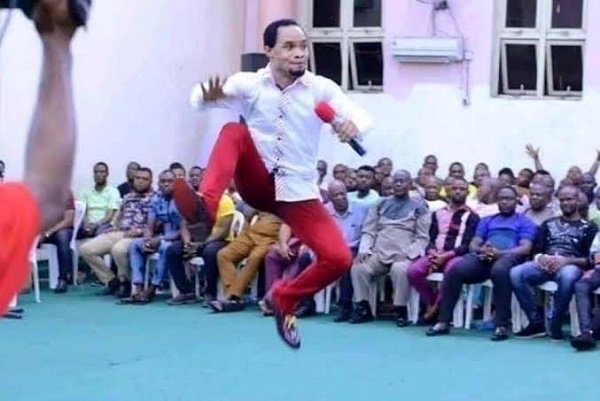 Chukwuemeka Ohanaemere, controversial Onitsha-based clergyman better known as Odumeje, is a man of many sides. But it seems there are still several things about him yet unknown to many Nigerians.

In a recent video published on social media, the self-acclaimed prophet showed that aside his pastoral calling, he would probably have been a great footballer — maybe not just as good as Cristiano Ronaldo or Lionel Messi.

In the viral video, the cleric, who is better known by a plethora of names including the ‘Indaboski Pahose’, ‘lion himself’, ‘the fight’, ‘the liquid metal’, ‘Lebadu’, ‘Seplae’, ‘fireman’, and ‘ladical plophet’, can be seen displaying his football skills.

Ohanaemere, who wore a white trouser and a black shirt dotted with white, was surrounded by a group of boys clad in jerseys and appeared ready to play football.

With a ball at his feet, Odumeje can be seen trying to dribble past some of the boys, while the rest can be heard cheering him.

With strings of dramas and controversies, Odumeje has etched his name on the minds of many Nigerians.

Amid the boredom and anxieties brought about by the coronavirus pandemic, clips of the pastor staging several theatrics have become a social media sensation for Nigerians to pass time and liven up themselves.

TheCable Lifestyle had earlier examined the personality of the clergyman who gained prominence on the groundswell of several unorthodox practices which have left opinions divided on social media.

The clergyman also made headlines recently after Zubby Michael, a Nollywood actor, came out to dismissed claims in some quarters that Odumeje gave him power.

Latest News SAINT MIENPAMO - September 21, 2020 - 5:34 pm 0
Bola Tinubu, the National Leader of the All Progressives Congress, APC, on Monday distanced himself from reactions attributed to him on the...

Edo Election Fallout: Only respect for Buhari keeping APC together —...