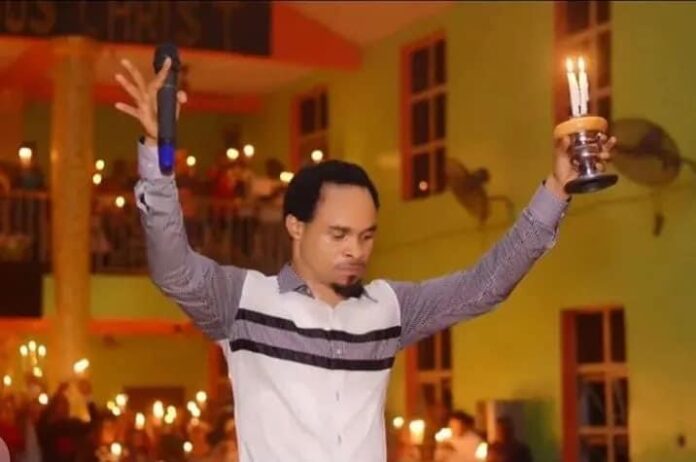 Prophet Odumeje “Indaboski” has revealed the date Nnamdi Kanu will be released from detention.

NAIJA LIVE TV reports that popular Anambra-based Prophet, Chukwuemeka Ohanaemere, popularly known as Odumeje “Indaboski” has predicted that the leader of the Indigenous People of Biafra, Nnamdi Kanu will be released by December 2021.

This online news platform understands that Prophet Odumeje gave the prophecy during a recorded prayer session.

In attendance were Kanu’s lawyer, Ifeanyi Ejiofor, and others.

Odumeje said: “Lord, your son Nnamdi Kanu is coming out this December, in the name of Jesus.

“Your son (Ejiofor) in the front of the battle, be with him always. Give them strength, give them wisdom. This is a battle of wisdom and the wisdom comes from you.

“In the presence of the judge, everything that comes out of his (Ejiofor’s) mouth shall be wisdom. Victory shall be given to us.”

Prophet Odumeje is General Overseer of The Mountain of Holy Ghost Intervention and Deliverance Ministry in Anambra.

The secessionist was intercepted outside Nigeria and repatriated on June 27 after years on the run.

Kanu’s trial at the Federal High Court in Abuja will resume in October. He is being detained at a Department of State Services (DSS) facility.

Justice Binta Nyako had turned down his legal team’s application for transfer to Kuje Prison.

Security services believe Kanu’s supporters would launch an attack on the correctional centre to free him.