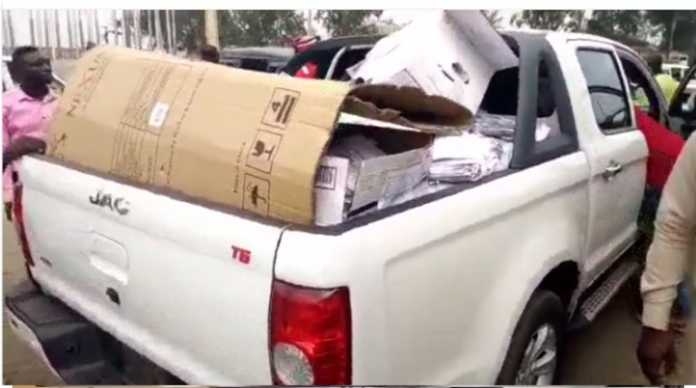 A JAC pick-up vehicle attempting to move documents from Imo state government house was intercepted on Wednesday morning by a group of young Imolites.

One of the young men who intercepted the vehicle, GTC Samuel who exclusively spoke to expressiveinfo said that the “vehicle was loaded with documents relating to Internally generated revenue, Land allocation and other important documents being hurriedly moved from the office of Secretary to the State government, Uche Onyeagocha (SSG).”

The drama which played out this morning at the front of Imo International Convention Centre (IICC) in Owerri has been captured by some as a clear case of ‘table turning around’.

Recall that the SSG, Uche Onyegocha is the same government official who, last year, after his appointment by governor Emeka Ihedioha, mobilised PDP youths for the arrest of former governor Rochas Okorocha after accusing him of looting the state and sponsoring thugs to attack a government official.

The pertinent question from those who intercepted the vehicle is why they were in a hurry to move out the documents ‘illigally’ after the Ihedioha’s administration had prided itself on due process and should have nothing to hide?

Meanwhile, we got reports from eyewitnesses who confirmed that the young people who intercepted the vehicle insisted and ensured that it was returned to government house.

Watch the video below.

Wife who caught her husband in bed with housemaid...