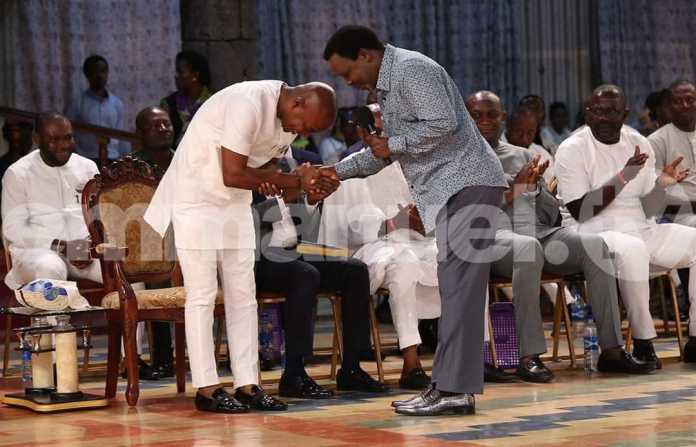 The Governor elect of Bayelsa State, David Lyon has been admonished by Prophet Temitope Balogun Joshua, (TB. Joshua) the leader and founder of The Synagogue, Church of All Nations (SCOAN), to use his brain, urging him to listen to the voice wisdom.

TB Joshua gave the charge on Sunday 1st December 2019 at the Synagogue Church of All Nations (SCOAN). BIGHT NEWS gathered that, the Governor elect, David Lyon had visited the SCOAN today to appreciate God for his victory at the poll.

The Nigerian pastor, televangelist and philanthropist, who enjoined David Lyon to shelve his proposed testimony till after inauguration by February 14th, 2020, spoke in proverbs:

“It Is Better To Live Poorly Upon The Fruit Of God’s Goodness Than To Live Plentifully Upon The Product Of Our Own Sin.

“Listen To The Voice Of Wisdom But Also Make Use Of Your Brain.” the man of God concluded.

Prophet Joshua had earlier stressed that, the only way the people of Bayelsa State will believe that they voted for David Lyon and his party in the just concluded November 16th Governorship polls in Bayelsa is by meeting their…..