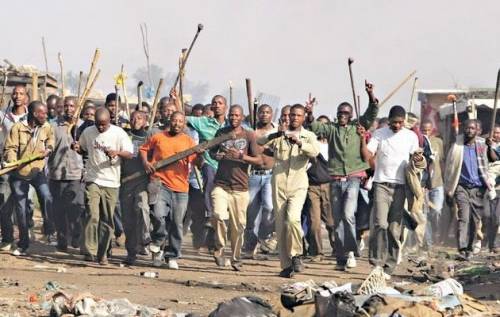 The suspects were part of a five-man gang of notorious robbers in the habit of terrorising the area and robbing unsuspecting business people around the Otiotio/Erepa district, mainly populated by Hausa traders.

While two were lucky to escape from the mob, one of them was severely injured.

The incident caused gridlock along the popular Mbiama-Yenagoa Road until policemen stormed the scene to stop the action.

It was gathered that luck ran out of the gang when they tried to rob a passerby who had only N1,000 in his pocket.

The victim reportedly raised the alarm to alert traders and residents, who immediately identified the suspects.

An eyewitness said the suspects were known to be tormenting people of the area.

“We suffer a lot from them on daily basic,” he said.

“They rob us and go free. The Police are not doing anything about it. They move freely with firearms in the state and nobody catches them. Even if they are caught, they’ll be released in no time.

“At least, we will be free for sometimes. This is the first and we will continue. Jungle justice will persist so that they will reduce this everyday crime. They rob people and cross to the other side of the community every day. We are on red alert now.”

Anxiety in Ekiti over rumoured failing health condition of...

My worst moment as father was carrying my son’s...