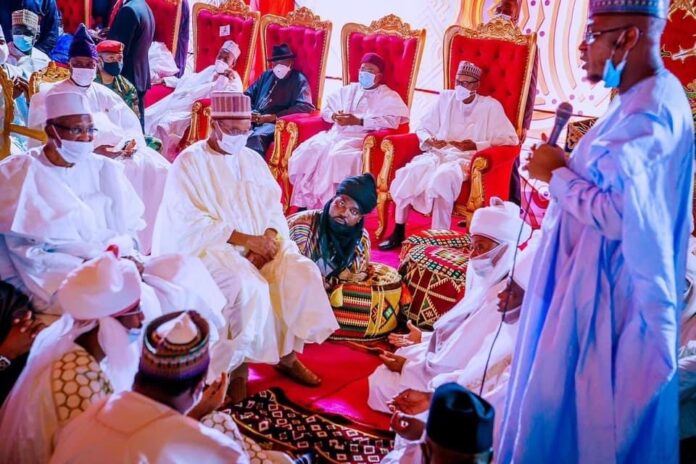 Yusuf, son of President Muhammadu Buhari, yesterday married Zahra, the daughter of the Emir of Bichi, Alhaji Nasir Ado Bayero, in presence of the President, Vice President Yemi Osibanjo and other dignitaries.

The much-awaited wedding, which held at the palace of the Emir of Bichi in Bichi Local Government Area of Kano State at about 2pm, after the Juma’at Prayer, was conducted by Sheikh Isa Ali Pantami, Minister of Communication and Digital Economy.

Yusuf, who met his wife Zahra, a graduate of Architecture from Brighton University, in the United Kingdom, paid N500,000 as bride price.

The elated groom, Yusuf Buhari, dressed in traditional white attire with a head gear to match, was surrounded by his friends throughout the ceremony.

The wedding had caused traffic gridlock within the town and its environs, business activities were paralysed as people thronged the venue of the wedding to witness the event.

NAIJA LIVE TV gathered that VIPs had since Thursday thronged Kano State, as hotel rooms became scarce as they were all booked to accommodate the guests.

There had been heavy presence of armed security personnel since Wednesday, as the state witnessed twin ceremonies of the wedding of the president’s son and today’s coronation of the bride’s father, Nasru Ado Bayero as the Emir of Bichi.

Governor of Gombe State, Inuwa Yahaya, who described the wedding as a national event, advised the couple to live peacefully as a family and in accordance with tradition and culture of the Nigerian society.

“They should do everything possible to live peacefully and remember the society they come from and do things according to the tradition and culture of the society.”

In his reaction, the Ooni of Ife Ooni of Ife Adeyeye Enitan Ogunwusi told reporters at the Airport that “Certainly, if our leaders have been using such initiatives and platforms to move to various positions and actions in Nigeria, the economy will continue to grow.

“Look at the living example of what happened in Bichi today. Bichi is a subset of the entire Kano State, look at the economy and the activities that have happened in Bichi today by virtue of Mr. President’s son’s wedding to Sarkin Bichi’s daughter. So if we can look beyond this country to foster unity, all the governors are here, from even different parties, PDP governors are here, APC governors came. So, there are some things that can bind us together in this country. So if we focus on what will bind us the country will be better and things will be easy for us.

“Even with the issue of security, we all went to Bichi and everything went well and peacefully. Tomorrow it can be anywhere else in the country.”

Others were the Chief of Staff to the President, Professor Ibrahim Gambari; Secretary to the Federal Government, Boss Mustapha and IGP Usman Baba Alkali.