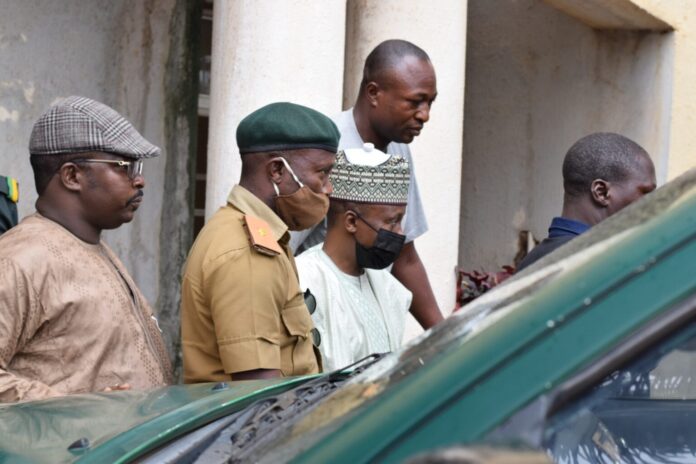 After an eight-year trial that was rife with controversies, Farouk Lawan, former chairman of the house of representatives ad-hoc committee on fuel subsidy, has been convicted in a $3 million bribe case.

At its sitting on Tuesday, a federal high court in Abuja sentenced him to seven years imprisonment over the bribery charges preferred against him by the federal government.

As the committee’s chairman, Lawan had overseen the green chamber’s investigation into the multi-billion naira fuel subsidy fraud in 2012.

He was accused of demanding $3 million from Femi Otedola to remove Zenon Petroleum and Gas Limited (Otedola’s company) from the list of oil companies allegedly involved in the subsidy fraud.

His trial by the Independent Corrupt Practices Commission (ICPC) had a lot of obstacles, so much that a total of four judges presided over the case at one point or another.

Lawan and his co-defendant were first arraigned before Mudashiru Oniyangi, judge of a federal capital territory high court, in February 2013.

But upon Oniyangi’s elevation to the court of appeal in 2014, the case was reassigned to Adebukola Banjoko of the FCT high court, Gudu.

The prosecution had barely called one witness, when Lawan petitioned the FCT chief judge, accusing Banjoko of bias. According to him, the judge was close to Otedola, who was billed to testify against him.

Banjoko then voluntarily withdrew from the case on November 18, 2014, after which it was transferred to Angela Otaluka, the judge who restarted the case on February 2, 2016.

However, Otaluka was directed to hands-off the case after another petition by Lawan accused her of bias. The former lawmaker’s main grouse was that Otaluka allegedly refused to adjourn the trial on many occasions to enable his lawyer to handle his defence.

The prosecution had called four of its five proposed witnesses and tendered documents when the case was transferred from Otaluka. It was eventually reassigned to Yusuf Halilu, judge of the FCT high court in Jabi, in June 2017.

Adegboyega Awomolo, the lead prosecuting counsel, challenged the transfer of the case, but Halilu dismissed his petition.

Awomolo went ahead to file an appeal against Halilu’s verdict. But before the appeal could be determined, Ishaq Bello, former chief judge of the FCT, returned the case to Otaluka in January 2018 who then handled it till the end.

HOW DID EVERYTHING PLAY OUT?

Lawan and Boniface Emenalo, clerk of the committee, were arraigned before an FCT high court on a seven-count charge.

The court granted Lawan and Emenalo bail in the sum of N10 million each, in addition to two sureties each.

The court was asked to quash their trial, but the application was dismissed on May 10.

The defendants were re-arraigned on a seven-count charge before Adebukola Banjoko at the FCT high court in Gudu.

Banjoko, presiding judge, withdrew from the case following a petition to the chief judge wherein she was accused of bias.

Lawan and Emenalo were re-arraigned for the third time before another judge — this time, Otaluka. But there was a twist: The ICPC amended the charge against Lawan, turning Emenalo, his co-accused, into a prosecution witness.

Emenalo told the court how he collected $100,000 from Otedola as part of the $3 million bribe promised to Lawan.

After the case was mentioned for the first time before Halilu, the judge dismissed the prosecution’s application seeking to transfer the case back to the former judge

The case came up before Otaluka at the FCT high court in Lugbe, having been returned to her by the chief judge.

Otedola testified that Lawan demanded $500,000 bribe from him. He said the former lawmaker removed Zenon Petroleum and Gas Limited from the list of indicted oil companies after he collected the money.

Otedola also told the FCT high court in Apo of how the Department of State Services (DSS) gave him the $500,000 he offered to Lawan. He said the DSS gave him the money to set a trap for Lawan after he (Otedola) submitted a petition to that effect.

Otaluka dismissed Lawan’s no-case submission and ordered him to open his defence.

The court of appeal dismissed Lawan’s application seeking to stop his trial. The appellate court, in a unanimous decision, held that a prima facie case was well established against Lawan that warranted him to enter his defence in the case.

After the submissions by the prosecuting and defense counsel, Lawan returned to court for the verdict on the case and was eventually convicted by Otaluka.