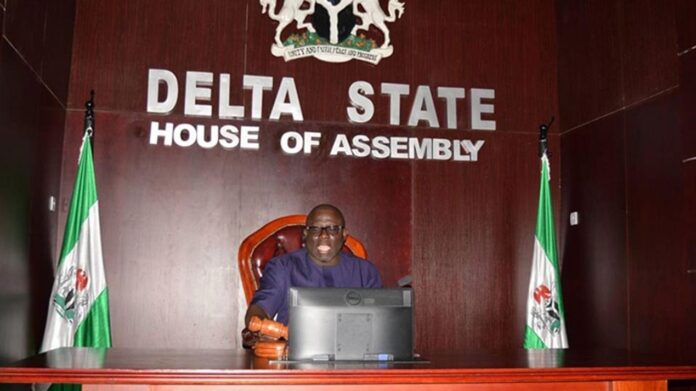 There was a mild drama on Tuesday, during the screening of Delta state commissioner nominees at the state House of Assembly, Asaba when a commissioner designate from Isoko North, Jonathan Ukodhiko was asked by the Speaker, Sheriff Oborivwori to introduce himself.

Ukodhiko, who started by saying “My names are”, was immediately interjected and faulted by the Speaker.

He was asked to introduce himself once again before the House.

Ukodhiko, who was visibly tensed up, again, started saying “My names are”, but the Speaker immediately interjected a second time and asked him to start again.

The nominee said again, “My names are,” and at this point, the Speaker told the nominee, “You can’t say my names are, it is very wrong, that’s not a good way of introducing yourself. Correct yourself and say my name is.”

Correcting himself, Ukodhiko said, “My name is,” and the House burst into laughter.

Meanwhile, there was yet another mild drama when the member representing Ughelli South constituency, Rueben Izeze, drew the attention of the House to the credentials submitted by a nominee, who is the immediate past commissioner for agriculture and natural resources, Julius Egbedi.

There was no tax clearance certificate attached to the documents.

Izeze said for anyone to be appointed into such an office which Egbedi was being screened for by the House, he must possess a tax clearance certificate.

At that juncture, the Speaker, Oborivwori, appealed to Izeze to calm down and then overruled his position.

The Speaker then asked the embattled nominee and others to take a bow and go.