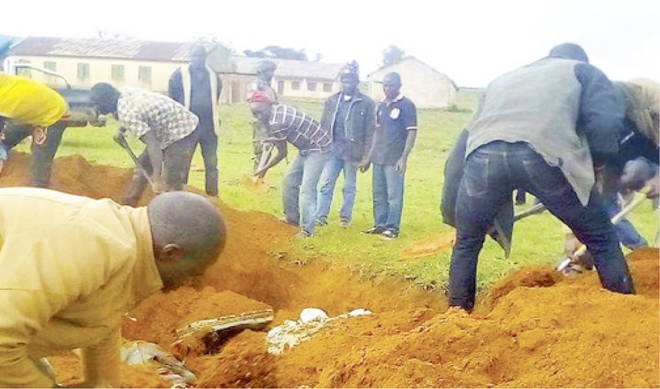 The Opinion article, 'Because of Cows' which was shared via our social media accounts have been deleted.
We regret this embarrassment as it is not in our character.

And so, mass graves opened up for the nth time and swallowed fellow Nigerians in Plateau State last week.
More than two hundred of them.

They died without knowing why. They hurt no one. They were, as in all cases in previous years in Plateau, Benue, Nasarawa, Taraba and Kaduna, innocent men and women.

Parents were not there to mourn their children. And children were not there to mourn their parents. Because they were suddenly reduced to corpses and disposed of in mass graves. All of them victims of the mad and senseless killings that are turning into a blood sport in Northern Nigeria.
Reactions of fellow Nigerians to this latest massacre were full of fury. As always. Even as they condemned it, and not for the first time, they knew that given the increasingly apparent impotence of the Nigerian state to protect its innocent citizens from its psychopathic citizens, it is more likely than not that the blood flow would not be stanched soon.

Nigeria now feels like a strange country for people. Some of us still remember when human lives were precious and were protected by the Nigerian state under a constitutional obligation to secure our lives and property. Now, we live in a country in which human lives are cheaper than those of animals. Where are the long hands of the law?

If you have the stomach for it, here is why the massacre happened.
Danladi Ciroma, chairman, Miyetti Allah, North-Central Zone: “These attacks were retaliatory. Those who carried the attacks must be a revenge mission. Fulani herdsmen have 300 cows in the last few weeks. Since the cows were not found, no one should expect peace in the areas.”

See? Do you know of a country where the loss of 300 cows would be justified by the massacre of 200 people? Nigeria is, indeed, a strange.
Ciroma’s arrogance is nothing new or strange. It is the badge of people who feel that they are entitled to do as they wish in the country and with the rest of us with impunity. Arrogance and impunity have morphed into the right of the privileged in our midst.
Inevitably, it is leading to this: Dr Hassan Kukah, Roman Catholic Bishop of Sokoto diocese, has impeccable patriotic credentials.
In public lectures and his prolific writing, he has never doubted that this country, with all its problems, still has a chance to remake itself and grow into its own shoes as the giant of Africa. I am afraid, he is beginning to doubt the wisdom of patriotism in a country that no longer places premium on it. His confidence in the capacity of the Nigerian state to be fair and just to all its citizens is badly shaken. If people like him give up on the country, we head for a greater calamity.

In a piece in the social media a couple of weeks or so ago, the erudite bishop wrote: Anyone who thinks the Biafra agitation is a nuisance and irritating should know that it is not the collective aspiration of all Igbos but especially that no one has the monopoly of nuisance. Nuisance begets nuisance. When you stay with potash loaders you too will share in their dusty hair. It is in this country that the same standards are not held against all. Some can get away with anything but others cannot get away with something. I shudder at those who blame the agitators for agitating. Everyone knows what is good for them. If you don’t know what is good for you then shut up and don’t obstruct those who know what is good for them. If I have my way, I will cease to be a Nigerian because there is no sense of nationhood. Those who have leverage over others use it to oppress them. Otherwise how can you explain the audacious impunity of a certain section of this country? They can intimidate everybody even a sitting president and get away with it. When GEJ was president he was literally harassed by this same people until they sent him packing and we thought they will be appeased. But alas, we were mistaken! “Now how do I love a country where a murderous terrorist group like the herdsmen acclaimed even internationally as deadly is being openly defended by a govt. that wants my loyalty? Do you know as I make this comment, a first class Chief of Bokkos LGA in Plateau State was murdered by a certain group of Fulanis almost a year now and no one has been arrested not to talk of prosecution; there are many villagers in my parish who cannot go to farm again except to farm their backyard because their farms have been forcefully annexed by their Fulani murderers; that in Bokkos a wife and a daughter can be taken away right before her husband or father and be repeatedly raped then released at the convenience of the barbaric Fulani tribesmen and no one dares talk; police will advise you to go and settle the matter through dialogue? I want independence from a country where terrorists are embraced and agitators are terrorized.

“At the slightest excitement Hausa or Fulani man can kill you and get away with it; it has happened and continues to happen but when you gear up to defend yourself because security will not, then you are caught by the same security who will lecture you on how to be peaceful and law abiding. This country will end unless there is justice for all. Rubbish! I hate the lie that Nigeria is. Let’s say the truth and die but it is what will set us free. Nigeria is negotiable to me the oppressed even if it’s not to the oppressor and that is normal.
“The only right Nigerians concede to you is the right to agree with them.”

ADDENDUM: “The writer of this article regrets the inclusion of what was earlier ascribed to the North-Central chairman of Miyyetti Allah, Danladi Ciroma, which was found to be concocted and untrue as an online newspaper, Premium Times, has apologized over it. EDITOR

Plateau killings: Imam who saved 300 Christians to get national honour

NIGERIANS HAVE DIED UNDER BUHARI THAN THOSE KILLED IN IRAQ, AFGHANISTAN – ATIKU