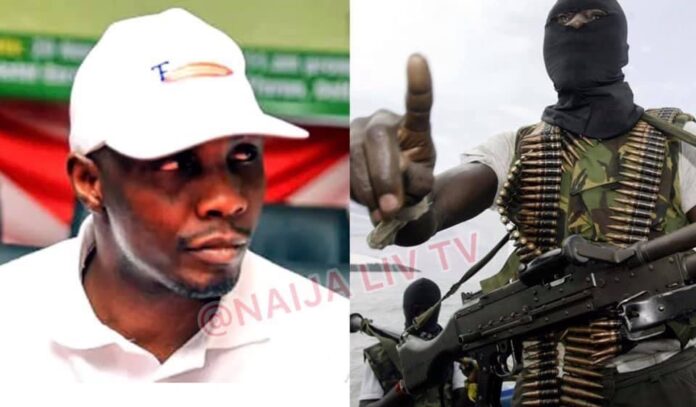 The atrocity forced the Joint Task Force, which suspended the siege to Egbema kingdom, following the attack and killing of some soldiers at a Military Base in Obodo, Warri South local government area, by militant leader and his boys, early July, to lock down the kingdom afresh in the last two days.

“On Thursday, the army deployed about 12 gun boats looking for the militant leader, but as at today (yesterday) when I am speaking to you (Saturday Vanguard), nothing has come out of the matter. We just heard they are fighting. The river has been closed since yesterday (Thursday) and today (Friday),” a villager revealed.

Chairman of Warri North Local Government Area, Hon Smart Asekutu, who also spoke to Saturday Vanguard, confirmed: “Six members of the Egbema Kingdom Peace Keepers were killed by the notorious militant leader, kidnapper and pirate, N.K, but we have recovered the remains of the three and taken them to the mortuary at Warri.”

“It is not nine persons that were killed, I think they are about six, the boy has been causing security challenges for us in the local government and the present lock down by the army has the support of the local government council because security agents have to track him down before he commits more havoc,” he said.

Asekutu urged the people of Warri North to cooperate with the soldiers, saying: “The current lock-down is to track down those kidnapping people and causing trouble so that there will be peace in the area.”

He said that those who had personal relationship with the militant leader had reached out to him, but he refused to stop his atrocities, hence the soldiers had to do what they were doing now to arrest him.

“He can be in the midst of people and when soldiers open fire, innocent people will be affected, that is why we want our people to cooperate with the security agents by giving them all relevant information,” he said.

The fleeing militant leader, who defied the pleas of Tompolo and Egbema leaders to stop his criminal activities went into hiding after killing the peace keepers .

Previous visits to his camp to arrest him failed, as he got wind and fled with his boys. However, Tompolo deployed some of the peace keepers, during the week, with soldiers to visit his camp once again and clip his wings.

“He reportedly got wind of the plan and laid siege for them on the waterways where he killed nine of the peace keepers, these are people with families, so there is still much wailing in Egbema since Thursday.

A source said militant leader was dislodged by the military in Lagos after which he relocated to Ondo state and later re positioned to Egbema kingdom, where he built a militant camp in the last few months and had committed many atrocities.

“In Egbema, he turned a terror, kidnapping hostages and collecting various ransoms from people and all efforts to rein him proved abortive.

“Leaders of Egbema ordered him to leave the kingdom but he refused, prompting them to report his escapades to Tompolo, who called a peace meeting, but he declined to show up.

“Earlier in June, the militant leader had also attacked Egbema peace keepers, killed one of them and fled with one of their speedboats

“It was three days after the onslaught on Egbema peace keepers that some soldiers were attacked and killed, which led to lock-down in Egbema. The army people he killed were not even in Warri North, they were in Warri South,” the informant added.