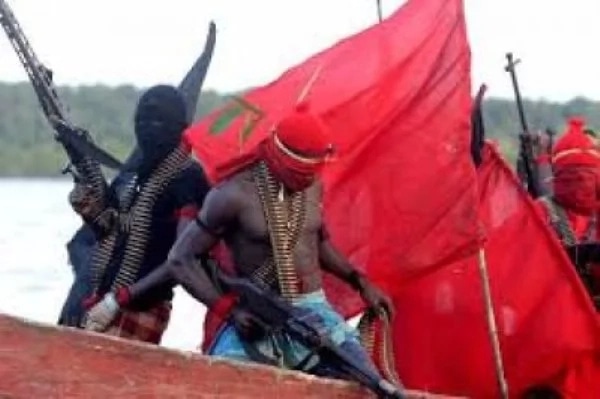 There is mounting tension along the creeks and waterways of the Nine States of the Niger Delta region following the declaration by Nine Militant groups to dump the existing ceasefire agreed with the Federal Government and resume armed agitation in the region over the allege refusal of President Muhammadu Buhari to stop the payment of 13 per cent derivation to state Governors of the region.

The Militant groups under the aegis of the Reformed Niger Delta Avengers (RNDA) the though the series of complaint and petitions against the State Governors’ diversion of the monies accrued from the 13 per cent into personal pockets and neglecting the needed infrastructural development of the oil producing communities seem to have falling on deaf ears, the decision by the President Muhammadu Buhari to allegedly connive with the State Governors by the refusal to stop payment of 13 percent Derivation funds to the State Governors will lead to bloodshed and shutting down of the Nation’s oil economy.

The Militant groups through the self-styled Major Gen Johnmark Ezonebi, also known as Obama, frowned at the proposed payment of 13 percent Derivation funds to State Governors despite protest and suggestions that it be paid to the oil producing communities in the region in order to improve the direct welfare and infrastructural need of the oil communities in the region.

According to Ezonebi, the Militant groups after an emergency meeting held in Delta State, have concluded that “they will soon collapse the ceasefire agreement entered with the Federal Government since on the 21st of August 2016, if the payment of 13 per cent derivation Fund continues to State Governors in the region. And that it will be bloody in the creek if our demands is not meant because the we will not fold our arms and continue to tolerate the deliberate perpetual injury occasioned by the governors of the oil producing states to the people of the region who are from the oil producing Communities in the creeks”.

According to the Militant groups,” there is serious deliberate neglect by the governors of the region despite receiving such huge amounts monthly while the people in the communities are abandoned and left to suffer while the governors live flamboyantly without human feeling for their fellow kinsmen who suffers the most hazard from the exploitation and exploiration activities from the drilling of the crude oil production from the Communities in the creeks and left with no single meaningful development and human empowerment despite the billions and trillions being collected by this Governors on behalf of the oil producing Communities “.

“The level of deliberate abandonment and neglect by the governors of the South-South states who are receiving over N180 billion to N200 billion yearly from the federation account as payment of 13 per cent Derivation Funds from the federal government on behalf of the oil producing communities in the region as part payment to develop the oil producing Communities but the Governors have channelled the funds into their pockets with their cronies and turn deft ears to the people.The governors have deliberately refused to use the funds to develop these oil producing communities in the creeks while leaving them in total darkness and abject poorverty without any significant infrastructural development as they continue to suffer environmental pollution, degradation, exploration and exploitation activities in these communities.”

“This is sheer heartless action as bandits to oil producing communities because these governors sit on and use what belongs to the oil producing communities as the people live with no portable drinking water, no electricity, no healthcare facility, no higher institution and good roads and housing, but have chosen to leave the people in the doldrums of excruciating poverty without any industry and no human capital empowerment in this oil producing Communities. But we have strongly resolved that we will soon resume fresh hostilities in the creek in retaliation of our anger and furious protest as we advise President Buhari to hence forth stop payment of this money to the South-South governors and channel the 13 percent Derivation funds payment to the oil producing Communities that is the only way out for the interest of peace in the region”.

“We are watching and waiting for Mr President to do the needful by stopping the payment of 13 per cent derivation fund to the governors, but paid to the right people from the oil and gas producing communities. We call on the President to consider establishing NOGCDEC that would receive and implement the 13 per cent Derivation funds, which representatives from the oil producing communities across the region will constitute it for proper and blanket development of the communities”.