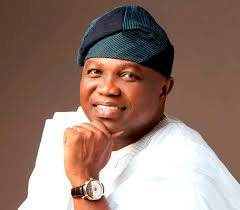 NAIJA LIVE TV gathered that, two of the property linked to the former governor including the one under construction which he aimed to use for his hotel in Ikeja GRA was put under lock by the anti-graft agency.

From the property monitored by NAIJA LIVE TV, it was learnt that the anti-corruption agency had since last week deployed its officials to seal different property owned by the immediate past governor.

The reason for the action was reported not to have been stated on the building except that EFCC marked the property as been under investigation after the owner violated the country’s law which the agency was saddled to enforce across Nigeria.

A source closed to Ambode told Newsmen that EFCC embarked on the act, which he described as unnecessary, last week and that the closure on Friday was another round of closure been carried out by the agency.

The source added that after the property in Ikeja was put under lock, the ex-governor and his legal team had begun to reach out to the agency and some chieftains of the party to mediate and resolve the issue before it escalates.

The closure of the property came barely two years after the Lagos state former governor left office following his inability to secure the All Progressives Congress (APC) ticket for his second term losing to the incumbent governor, Babajide Sanwo-Olu.

Ambode, who was inaugurated alongside 60 others as a member of the APC contact and strategy committee less than a month ago after revalidating his membership with the ruling party

“I have nothing good to say about TB Joshua”...