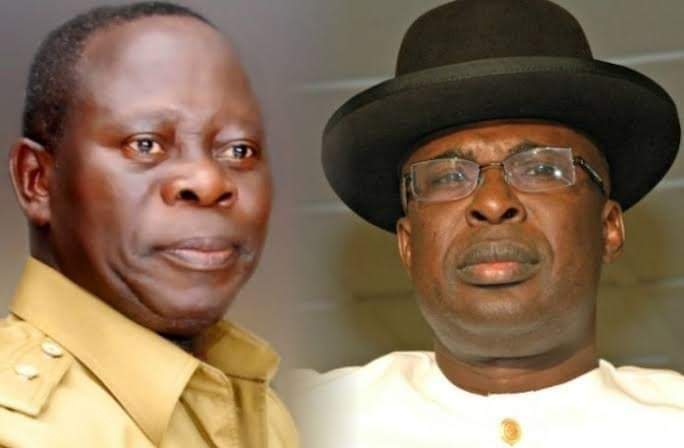 Supporters of the All Progressive Congress (APC) in Bayelsa State have slammed the Minister of State for Petroleum Resources, Chief Timipre Sylva and the National Chairman of the Party, Comrade Adams Oshiomole over the shoddy handling of the selection process of the candidates of the party in the Governorship election in the state which led to the nullification of the victory of the party by the Supreme Court.

A five-member panel of the apex court led by Justice Mary Odili had on Thursday nullified the election of Mr Lyon on the grounds that his deputy, Biobarakuma Degi-Eremienyo, presented false information to the Independent National Electoral Commission (INEC) in aid of his qualification for the November 16 governorship election in the state.

Reacting to the development, the APC supporters under the aegis of Progressives for Development and Good Governance led by its Coordinator, Comrade Peter Jekkinson , blamed the due of Chief Timipre Sylva and the National Chairman of the Party, Comrade Oshiomole for initiating a faulty and poor processes that led to the emergence of Chief David Lyon and his deputy, Senator Biobarakuma Degi-Eremienyoas flag bearers of the party.

The group insisted that the duo of Lyon and Degi-Eremienyoas were not the popular choice of the members of the party and that the process that led to their emergence was faulty, asking that the duo of Sylva and Oshiomole should resign their appointments as Minister and National Chairman with immediate effect.

According to the group, “We are calling on OshIomole to resign within 48hours for the failure of APC in Bayelsa. That this is what some genuine members of party foreseen coming, and argued for a better candidate but because of Sylva’s greed and Oshiomole’s longer throat for money, collected money with oil blocks promises from Slyva and joined Sylva to bring a governor that was doing rehearsal for swearing in, which has never happened in this country before”.

”They also brought a deputy governorship candidate that had multiple names that has led to the misfortune of APC in Bayelsa state. That all aggrieved members, of the APC should focus their anger towards Sylva and Oshomole and not to protest and cause unrest in Bayelsa that is unfortunate. People should reason before they take any actions”.

“The judgment of the supreme court, before even it was given this is a clear case that it is very very stupid of anybody to have thought that the supreme court will allow this broad day illegality to come to pass believing that a man with such multiple names is qualified to contest an election in Nigeria”.

“The truth is that we are not in Banana Republic, we are in Nigeria by the special grace of God there are certain cases that no matter how corrupt anybody will think, or believe the judiciary is there are certain cases that even in the worst of corrupt areas, you cannot sweep under the carpet and that has caused APC an election won is now a mirage”.
“Some people have heart attacks, some collapsed because all their hope was built on this. They went out to insult Dickson and did all sort of things because they were believing that they have somewhere to hang on this end. But today all that is dashed just like that with like it was a dream to everybody of Bayelsa state”.

“So we are calling on all well-meaning APC members to look at Sylva and Oshiomole as the real people who caused this thing to them. And vent their anger on those people not on Bayelsans.
That nobody in Bayelsa, neither PDP nor anybody, is the cause of what happened. Rather it is Oshiomole and Timipre slyva”.

The group however called for calm insisting that it is God that knows the reason for all these that happened. Possibly, the APC of David Lyon and Timipre Slyva wouldn’t have brought anything better. That’s why God has cut short this danger that was to have befallen Bayelsa state, and at the same time telling the APC members that in every contest, there must be a looser and a winner”.

“Others, have had judgments when they had even better hopes than this but they lost it and everybody has taken it in good fate. In Zamfara they did not protest, when they lost all assembly seats, all senate seats, house of Rep seats, so it will be very wrong of us as APC members to protest and cause problem in Bayelsa”.

‘Everybody should see it as a divine work of the almighty God and whatever God has pre-destined, for the APC it will come genuinely through genuine members of the Party not people who have evil thoughts against the people they want to govern.

Therefore we want to thank God for what has happened, but nobody should cause any problem in Bayelsa, rather they should ask Sylva and Oshomole, why they did this to us”.

JUST IN: 5 New Cases Of Coronavirus In Nigeria...