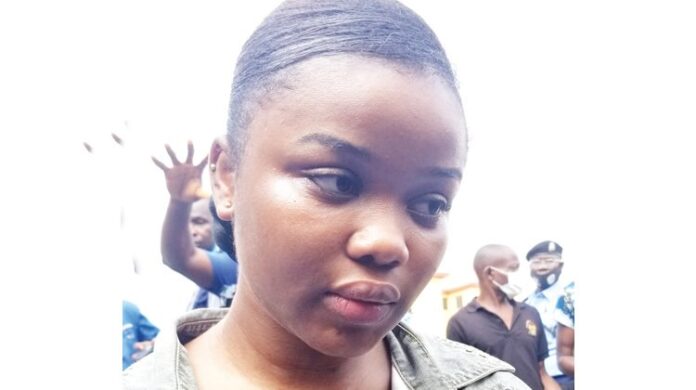 Commendations are in order for the men of the Lagos State Police Command over the arrest of Chidinma Ojukwu, the 21-year-old student of the University of Lagos, who allegedly stabbed the Chief Executive Officer of Super TV, Usifo Ataga, to death in the Lekki area of the state.

The Police Public Relations Officer in the state, Muyiwa Adejobi, in a statement on Friday, said the Command adopted a “scientific method” to arrest the suspect.

NAIJA LIVE TV had earlier reported that the suspect and her father were arrested at their residence at No. 57, Akinwunmi Street, Alagomeji, Yaba, on Wednesday night.

The father of the suspect had resisted his daughter’s arrest because he didn’t believe that his daughter committed any crime until she confessed on Thursday.

The undergraduate was later paraded on Thursday at the command headquarters in the Ikeja area of Lagos but her father was not paraded.

When paraded, the UNILAG student confessed to stabbing 50-year-old Ataga to death on June 15, 2021.

The 21-year-old said she had been in a romantic relationship with Ataga for about four months before the ugly incident occurred at a Short Service Apartment, situated at No 19, Adewale Oshin Street, Lekki, Phase 1, Lagos.

Ojukwu had also said that she and Ataga were “having fun” when an argument broke out and she stabbed him twice after which she withdrew N380,000 from his account using his ATM card.

The suspect, who fled the scene, was, however, arrested at her father’s residence in the Yaba area of the state.

Some Nigerians on social media have since praised the men of the Lagos State Police Command for the timely arrest of the prime suspect in the murder case.

The PPRO, in the statement, said an Information and Communication Technology unit recently created by the Commissioner of Police, Hakeem Odumosu, tracked the suspect, who used different SIM cards – both Nigerian and foreign ones.

“The unit, named D23, headed by SP Kasumu Rilwan, a computer scientist, has been instrumental to the landmark achievements and many feats recorded by the command under the watch of CP Hakeem Odumosu, including the latest arrest of the prime suspect in the alleged murder of Mr Michael Usifo Ataga, one Chidimma Adaora Ojukwu on 23rd, June, 2021.

“Similarly, the Commissioner of Police recently created two Squads, the Special Squad and the Strike Team, at the Command Headquarters, Ikeja-Lagos, to complement the existing department and units of the command in combating crimes in the state. The new Squads, as well, have played many roles in suppressing and keeping criminals and hoodlums at bay in Lagos State.”

Meanwhile, the Lagos CP said that “the case will be charged to court as soon as investigation is concluded”.

21-year-old man sentenced to death for robbing pharmacy in...