The Super Eagles of Nigeria will on Monday fly out of their base at the Avita Resort in Bad Tatzmannsdorf, Austria to Russia for the 21st FIFA World Cup finals – their sixth appearance in seven finals since making a memorable debut in the USA in 1994.

Since emerging from an appropriately –styled ‘Group of Death’ in the African qualifying series, becoming the first African team to reach the finals in Russia, the Eagles have played against Argentina, Poland, Serbia, DR Congo, England and Czech Republic in friendlies, winning two, drawing one and losing three.

Sweet victories over two –time world champions Argentina (finalists at the last finals in Brazil) and Poland were followed by defeat by Serbia, a draw with the Democratic Republic of Congo and losses to England and the Czech Republic.

Coach Gernot Rohr would be the first to admit that the statistics from these friendly encounters are not head –turning, but he insisted at the weekend, just as Captain Mikel Obi did few days earlier, that the underdog tag that has come as a result suits the three –time African champions nicely. 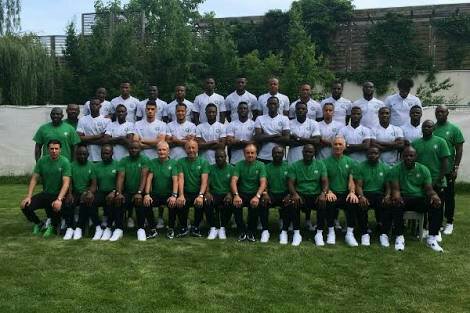 “We are okay with the garb of the underdog. But the defeats have done something for us – we have our heads firmly on our shoulders and we are focused.

“Together, we have reviewed the matches and learnt so many lessons. We will approach the World Cup matches differently,” said Rohr.

An underwhelming recent record, being the lowest –ranked team in Group D and the lowest –ranked African team in the finals, plus a recent tag by FIFA as mere ‘perennial World Cup appearance –makers’ all tend to project the Eagles as a side waiting to be rolled over.

That would be the biggest mistake of the so-called big teams.

Nigeria’s senior team has the knack for coming to the party when least expected. Lumped in a fiery assembly with Cameroon, Algeria and Zambia in the African qualifying race, the Eagles made short work of the pool, emerging runaway winners with a match to spare, and with the distinction of hammering African champions Cameroon 4-0 on a spectacular evening in Uyo.

In 1994, the Eagles, after winning the Africa Cup of Nations in Tunisia, failed to excite in friendly games leading to the World Cup. But as debutants, they thrashed Bulgaria 3-0 on a sunny afternoon inside the Cotton Bowl in Dallas. Four years later, they lost 1-5 to the Netherlands in their last friendly game before heading to France, only to shock World Cup favourites Spain 3-2 in their opening game at the Stade de la Beaujoire in Nantes.

Rohr has only lost one competitive game since taking over the Super Eagles two years ago, and the former German international defender says his wards know how to get their spring back when the whistle goes for kick –off at the Kaliningrad Arena on Saturday.

“We will take it one match at a time. I love this group because we know how to rise to the occasion together. Nigeria will be ready for Croatia.”

For sure, the tactician has the pieces to craft a crack squad capable of surprising the bookmakers in Russia. Young goaltender Francis Uzoho has logged useful hours since making his debut against Argentina in Krasnodar in November last year, and deputies Ikechukwu Ezenwa and Daniel Akpeyi are even more experienced. The dependable ‘Oyibo Wall’ of Leon Balogun and William Ekong can trust either of Abdullahi Shehu and Bryan Idowu or Tyronne Ebuehi and Elderson Echiejile to cover the flanks well enough, and Kenneth Omeruo and Chidozie Awaziem are also available.

Skipper Mikel John Obi retains his steel and ball – holding ability in midfield, with Wilfred Ndidi having recovered from injury in good time and John Ogu showing versatility in recent games. Oghenekaro Etebo, Ogenyi Onazi and Joel Obi add to the options in that sector.