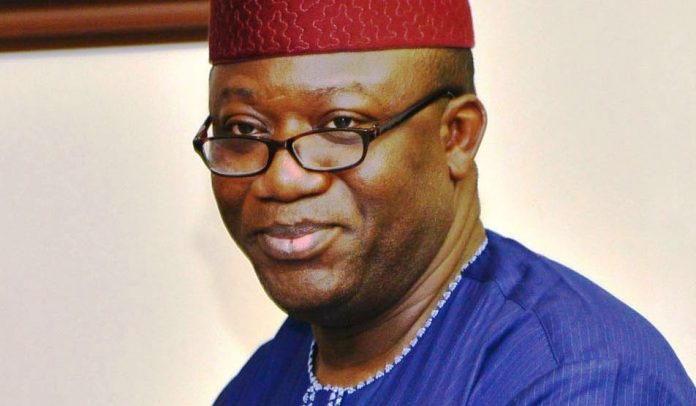 The governorship candidate of the All Progressives Congress (APC) for the July 14 election in Ekiti State, Dr. Kayode Fayemi, on Sunday announced the name of the ailing Hon Opeyemi Bamidele as the Director-General of his campaign Council.

Fayemi, described the event leading to the shooting of Bamidele last week during a stampede at the APC secretariat in Ado-Ekiti as very unfortunate, saying there was need to retain the party chieftain, having consented to serve in that capacity before the horrible twist at the rally.

Bamidele and five others were shot by a policeman who mishandled his rifle during a mob action in the midst of the crowd.

This was just as Fayemi inaugurated his Ekiti State campaign council that
will work with that of the national, led by Kebbi State Governor, Alhaji Atiku Bagudu that had earlier been inaugurated by the National

Chairman of the Party, Chief John Odigie-Oyegun for the success of the party in the July 14 poll.
Speaking after inaugurating the council in Ado Ekiti, Fayemi refuted the allegation that Bamidele has been flown to London for medicare, describing the media report as false and unfounded.

“Hon Bamidele has not been flown abroad, he is still in Lagos. I was with him till 1am today (Sunday). He is recuperating here in Nigeria and if there is need to take him abroad, we will tell the public.

“But let me state here that we are still retaining his position as the Director General of this Council, because he had already accepted to be DG of this council before that incident”.

The candidate said the National body of the party will flag off the campaign in Ekiti on June 19 while the grand finale that will be led by President Muhammadu Buhari will hold July 10.

He said his campaign will official takes off today in Ekiti East local Government, appealing to members to begin aggressive house-to-house campaign for the party’s acceptability to grain more traction among the electorate.

“Let me state here that the shooting incident should not be seen as a pointer to what will happen on July 14 election. We are committed to peaceful election and the security has assured us that they will be alive to their responsibilities.

“The intelligence report we got that the PDP was plotting to cause violence of various forms in every part of the state has been shared with security agencies and they are working on it.”

Fayemi said the party has been receiving deluge of defections from the PDP in recent time, saying those that will join the APC in one week time will shock the state.

“We are happy that every contestant , I mean the governorship aspirants are contributing to our campaign, so APC is intact and united. They are all eager to work for the victory of our party in this election.

“Unlike PDP that is disunited. You could see that Prince Dayo Adeyeye has formally joined us. Others will be joining us one after the other and before the election, Governor Ayodele Fayose will be alone,” he said .

Fayemi charged members of the committee not to segregate or discriminate against each other, urging them to work together for the victory of the party.

The State Chairman of the party, Chief Jide Awe, said the campaign was decentralized to give more leverage for those at the units, wards and local governments to be able to work in the grassroots where the bulk of the voters are domiciled.

Awe urged them to be vigilant and eschew undue discrimination as they perform the task for the party to be able to win the election.