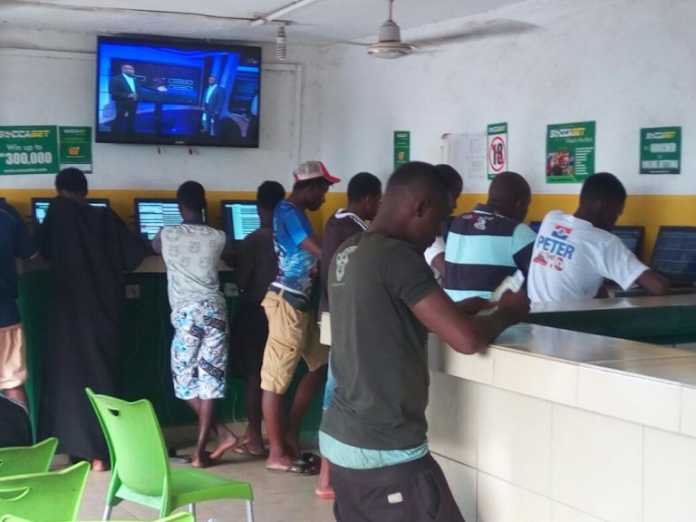 A disturbing incident in the lucrative industry of sports betting emerged on the 16th April, 2020 when the agent of a Yenagoa based pool company, New Stage Pools, accused the Chief Executive Officer of Bet 2 Star Pools, Mr. Nwokolo Joshua, of defrauding unsuspecting stakers and obtaining money from them by false pretence.

In a petition sighted by NAIJA LIVE TV and written on behalf of Mr. Kenneth Uti, CEO of New Stage Pools, by Egbulonu & Co Solicitors and addressed to the Commissioner of Police, Bayelsa State Command, Bet 2 Star Pools is allegedly enmeshed in a case of internal betting fraud against its affiliate agents across Yenagoa.

The fraud allegation, it was gathered, runs into millions of naira, and may attract the intervention of the Economic and Financial Crimes Commission (EFCC) if the monies are not paid to stakers who won their bets in week 40 of the sports betting season.

Parts of the petition read: “our client informed us that he is an agent to Bet 2 Star Pools, whose office is at Azikoro Road, Ekeki Yenagoa. We were informed that the business of the said company is to coordinate and arrange pools for stakers and at the end of the week, winners are paid.

“This has been a weekly routine and most times, pools don’t even win and the entire money goes into the pocket of the said pool company, Bet 2 Star Pools. We were informed that last week, which was Week 40, there were some winnings and based on the odds, the said company was supposed to pay the winners.

“Surprisingly, the owner of the business refused to pay the winners and without notice, ran away with the monies that were supposed to be paid through our client, thus exposing our client to public ridicule and threats from the winners. The company rather shut down their office in Yenagoa and relocated to Agbor, Delta State.

“And when some persons in Yenagoa called the owner of the company, to find out why he relocated without paying them the proceeds from the bet they won on week 40, he simply couldn’t give any tangible explanation. There are presently threats to attack our client who was only an agent and if the matter is not arrested early enough there might be breakdown of law and order.”

It was gathered from sources that trouble began when the promoter gave the odds of the games for that week at 30 odds per 1 stake, as against 10 odds per 1 stake given by other pool companies across Nigeria. According to stakers, this means that if one places a stake of N100 on a game for that week, the possible return would amount to N300 if he/she wins the game.

It was further learnt that, when unsuspecting stakers in Yenagoa saw the juicy odds placed on the draws by Bet 2 Star for that particular week, they jumped at it and staked heavily. According to pool agents, other promoters that placed their odds for the draws at 10 per 1 didn’t get much returns for that week for this reason.

According to Mr. Uti who spoke to our correspondent at his pool office in Yenagoa, most of the stakers won the bet for that week, and that on noticing the fact that he would be on the lossing side for the week, the promoter suddenly changed the payment plan of the games from 30 odds per 1 stake to 10 odds per 1 stake.

“My job as an agent is to collect monies for bets placed, take my Commission and remit the rest to the promoter. Over time, this particular promoter is know to place his odds very high and this attracted stakers to him. And his has been making lots of money because many persons stake their bets with him and when they lost, the whole monies goes to him.

“But for that particular week 40, things didn’t go his way as lots of person won the draws. And when the time to pay the stakers their winnings came, i called him but was surprised to hear that he was no longer going to pay according to the odds he published. He rather said he was going to pay according to 10 odds to 1. And when I explained this to my customers, they got infuriated and felt cheated.

“I have made several efforts to make the promoter see reasons but he has refused, saying they refused to take the money he wishes to pay, they should forget about it. As we speak, people are harassing and threatening me everyday because of this case. The reason is that I have changed rules of the bet after the bet had already been placed and that it amounts to fraud. But as you can see, this not my fault.

“And from investigation, I am not the only pool agent suffering this fate in the hands of Bet 2 Star. Pools agents across Bayelsa State and other parts of Nigeria are having problems with their clients because of what the promoter of that bet company has done. Many members of our association have also lodged complains over this same matter.”

Mr. Prince Okafor, a resident of Yenagoa who also placed a stake on the draws for that week said “I have been playing pool for over a decade now, because it is an international business that sustains some of us here in Nigeria. What happened that week was not only against the rules of the game but amounts to collecting money from people by false pretence.

“What the promoter did was that, after giving the odds for the week, he noticed that the game didn’t favour him at the end, so he denied ever giving that odd for the games. All I have to say is that, it is wrong to change the rules of the game after it has begun. And for this reason, I must collect my entire winnings for that week. I say so because each time I lose, I don’t go to the shop to make false claim but rather I accept my fate.”

When contacted via telephone to seek clarification on the matter, Mr. Nwokolo, the promoter of Bet 2 Star said “the company declared dividend at 10kobo per stake and the monies have been paid to winners for that week. And if they think that the dividend is not good enough for them, they should increase their stake.”

When asked about the change in odds, he said “what logic did you used to arrive at that 30 odds to 1? Like I said, the company has declared dividend, and we arrived at 10kobo per stake and we have paid them. I am not aware of any persons that have not been paid. I have never been to Bayelsa, I operate from our headquarters in Delta, so I would know if there is any protest against me.”

“Some Of Our Members Have Compromised With PDP” Bayelsa West APC Chieftain Cries Out …endorses Hon. Kolokolo for Senate

COVID-19: Why Cross River has not recorded any Coronavirus...