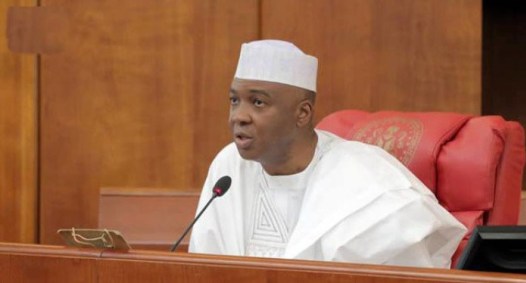 President of the Senate and Chairman, PDP Campaign Council on Osun State Governorship election, Dr. Abubakar Bukola Saraki, has reiterated that the recently conducted supplementary election in Osun State, was a charade and an embarrassment to Nigeria’s democracy.

In a statement by his Special Adviser on Media and Publicity, Yusuph Olaniyonu, Saraki stated that: “Yesterday, we witnessed another display of the subversion of the will of the Osun people during the re-run gubernatorial elections in the State. The election was characterised by widespread voter intimidation, violence and harassment. Accredited observers were denied access to polling units and duly registered voters were prevented from participating in the electoral process by thugs and compromised security agents..

“Like I said a few days ago, this needless re-run election was only designed as an avenue for the ruling party to perpetrate electoral fraud. The nature of these elections is an embarrassment to our democracy and casts an alarming pall on the institutions responsible for protecting the will of the Nigerian people as stated through their votes. That was why for more than ten hours the INEC could not collate and announce results in just seven polling units with just over 2000 votes.

“It is surprising that the election in which on Saturday, the two leading candidates were running neck to neck with the PDP candidate having an edge, four days later, as a result of manipulations and impossible conditions, the APC candidate is now being credited with all the votes and some paltry number of votes were being recorded for the PDP candidate.

“It is important for Nigerians and the international community to insist that the hands of the clock should not be turned back in terms of the achievements we recorded in the last general elections. We should not make a mockery of democracy by conducting elections in the manner that the Osun Polls were conducted. The Osun election is a clear indication of how the 2019 election will be conducted. It demonstrates that if we cannot conduct free, peaceful and fair elections in seven polling units spread across four local government areas of a state, then the conduct of the general elections in 774 local government areas across 36 states of the country is already endangered.

“I therefore call on the government, INEC, security agencies and development partners to ensure a radical change in the way and manner the next set of elections will be conducted. Osun 2018 Polls is a very low point in our electoral system.

‘”In the 2015 elections, Nigeria witnessed several gains in its electoral process. The process was transparent and people’s votes counted. These gains made it possible for the then opposition party, the All Progressives Congress (APC) to win at the centre and in many states of the nation. That election highlighted a fine moment in Nigeria’s democracy.

“It is disheartening that the major beneficiaries of those credible processes are now the ones subverting the basic principles of our democracy in every way possible. It is appalling that these people are willing to destroy our institutions in their quest to circumvent the desires of the people.

“It is important to once again reiterate that the re-run election in Osun State is not only about Osun State. It serves as a reflection of our country and the way we are viewed by the world. Like I said a few days ago, this theft of the mandate given to Senator Ademola Adeleke, the Peoples Democratic Party (PDP) candidate for the elections, will not stand. Our party will immediately commence the legal process aimed at reclaiming the sacred mandate of the people of Osun State.

“I would like to reassure members and supporters of our party, the PDP candidate, Senator Adeleke and the entire good people of Osun State that light shall always overcome darkness. We have come this far after several months of dedication and hard work. I ask that we remain of good cheer, steadfast and committed to the cause. Victory, no matter how delayed, will not be denied,” Saraki stated.

Special Adviser (Media and Publicity) to the President of the Senate

Insecurity: Give PDP another chance in 2023 – Saraki to Nigerians

My Husband Caught Me Cheating And He Did This...