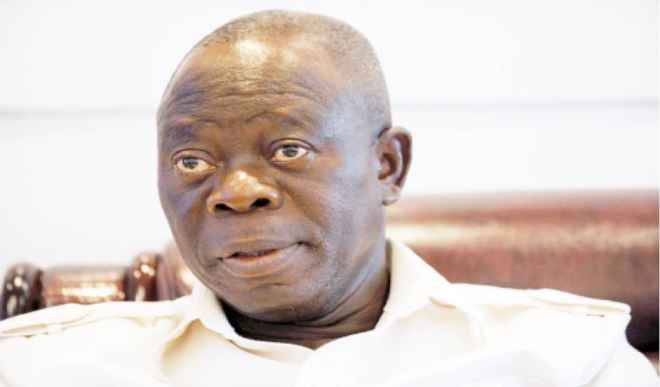 The All Progressives Congress, APC, has explained why Minster of Women Affairs, Hajia Jumai Alhassan and her Ministry of Communications counterpart, Adebayo Shittu, were disqualified from contesting the governorship primary election of the party.

While Alhassan was eyeing the party’s governorship sole ticket in Taraba State, Shittu battling for the APC governorship flag in Oyo.

They were both told they can’t contest on the platform of the APC, yesterday for different reasons.

National Chairman of the party, Comrade Adams Oshiomhole gave the reasons at a news conference Friday in Abuja.

He said, “He (Shittu) admitted that he did not do the mandatory NYSC as provided for under the law and in his own judgment, his being a member of the House of Assembly in the state and now as a Minister of the Federal Republic, that these were enough sacrifices. But for us as a party we know that NYSC is a mandatory scheme.

“It is not something you may elect to do or abstain from doing and my understanding of the NYSC Act is that no employer of labour is permitted to employ anyone who graduated under 30 years and who did not obtain an exemption for reasons as provided for in the NYSC Act.

“So, for us, not participating in the NYSC raises very serious moral issue as well as legal issue.

“As for the Honourable Minister of Women Affairs, she has issues that have to do with party loyalty. Our constitution is clear and it dictates that to contest elections or even hold office in the APC, you must be loyal to the party in every material concern.

“From all she had said in the past and even her comments and general attitude during the screening, the NWC reviewed everything taken together and we arrived at the conclusion that she does not possess the level of loyalty that the APC requires for her to contest elections on our platform.

“We made it clear when the defections happened that APC may well benefit from these defections if it helps us to be more critical in terms of whom we give platform to contest elections and that there are core values that binds the APC together and they are non-negotiable.

“The Electoral Act and the APC Constitution forbids anyone from being a member of more than one political party at a time.

“You cannot be a member of APC and be a card-carrying member of another party but when you have a situation where it would appear, based on what you know and based on what I know that someone is probably APC in the daytime maybe for the purpose of retaining certain offices and they are PDP at heart or if they are not PDP at heart, they are actually and simply a follower of a one-man permanent presidential candidate…then we have the right to ask ourselves if these attitudes and qualities are characteristics of an ideal member of an APC. So, those are the reasons.

“We did not want to have a lengthy explanation to do but she knows why she was disqualified and we know why we denied her the use of our platform”, he said.

BREAKING: Oshiomhole Finally Bows Out, Thanks Buhari For His Support