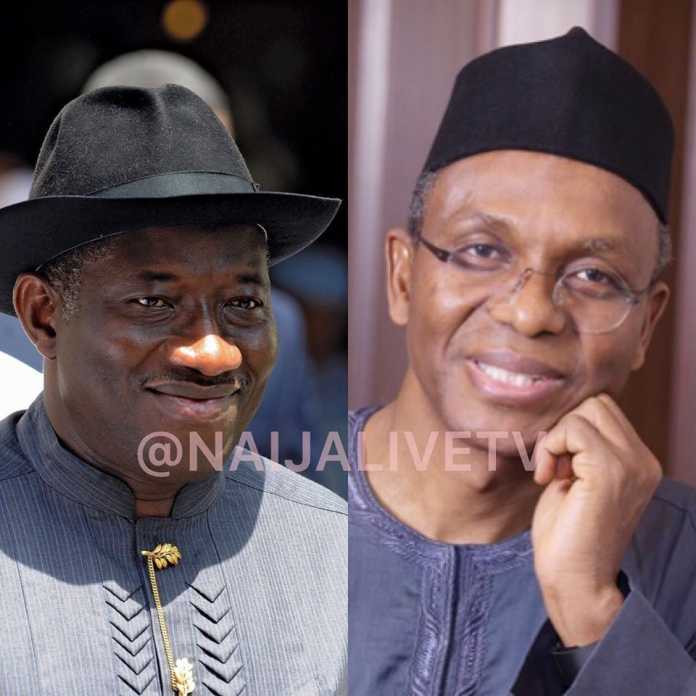 President Muhammadu Buhari is plotting for a spectacular return of former President Goodluck Jonathan, a reliable source in the Presidency revealed to NAIJA LIVE TV on Saturday.

That’s even as former Governor of Zamfara State, Abdul’aziz Yari has been pencilled down to replace Adams Oshiomhole to enable the All Progressives Congress, APC, field a presidential candidate of southern extraction.

In Yari’s case, the source said President Buhari, who is also of the APC, contends that the ideal thing is to allow Oshiomhole to complete his tenure but the controversy he is generating is too much and so has to go.

The president the source confided would make known his position to Oshiomhole in the coming days.

According to the source, the president and his closed aides are disposed to pave the way for a southern presidential candidate on the party’s platform to balance the political equation.

Meaning the two leading political parties would field their candidates from the South. But with the plot to return Mr Jonathan, the source said the president was ready to compensate Mr Jonathan and so would do every thing to ensure he emerges president in 2023 on the plate of the Peoples Democratic Party, PDP.

On Oshiomhole’s exit, according to the source, the president believes there was no better time than now since the suspended Chairman continues to generate controversy with more than half of the senior members of the APC and political office holders disposed to his abdication.

In any case, the source said the president and his inner caucus would allow “a fair deal to ease out” the former national labour leader.

“Yari will definitely play the plot of the president to allow Mr Jonathan return in 2023. He will make it difficult for those the president believes are too corrupt from the South especially from the South West who are already showing their interest to get the party’s ticket.

“Even if that ‘particular’ person gets the party’s ticket, the odds would be stacked against him from the powers that be and the belief that Mr Jonathan performed well while in office as against the propaganda leading up to the 2015 elections.

“Mr Jonathan, the president believes has learnt his lesson and would do far better should he return.”
Asked if this return is to compensate in one hand the South and cause rift in the three southern zones especially to alienate the South West in the other hand, the source said “It appears much like it but not entirely.

“But you know politics is full of intrigues. The launch of the South West security network has angered many northerners, the president, his handlers and inner caucus so much that it appears pay back time has come.

“Even though other zones in the South are making arrangement to launch theirs, nobody is bothered in the North because someone started it and besides, the South East and south south are involving the relevant authorities. So that’s not unsettled anyone in the Presidency or in the North.

All what people are saying is what the south west has done.”

He pointed out that those hoping to get the ticket of APC to contest for Nigeria’s number one job did not speak against the security outfit, amotekun.

“His hand was not tight,” referring to Bola Tinubu, when asked if the former Lagos State Governor was being referenced.

“He should have spoken out. He didn’t speak. He therefore doesn’t enjoy support if any as he used to before now in the North.”

He explained that Mr Jonathan’s frequent visits to Aso Villa and the wife, Mrs Patience Jonathan who has also been briefed which was why she was invited to Aso Villa in February.

Mrs Jonathan visited the First Lady, Aisha Buhari twice in February for the first time since Buhari ousted Mr Jonathan from power in 2015.

Speaking during the visit, Mrs Buhari had tweeted, ”It was really nice having her around and I look forward to having more of such moments.”

There have been questions lately at the frequent visit of Mr Jonathan to meet with President Buhari.

The source said the president understands now that Jonathan did his best and deserves a second term, adding that those around him were responsible for the looting of the public treasury during Goodluck’s regime.

He had said, “I want to say that those of us from Northern Nigeria honour agreements. We do not violate unwritten political agreements and I will be the last person to lead in violating that agreement. I may have a personal view but that should be the basis. I don’t care where you come from but I look for merit.

“But as a group, the Northern APC will have to sit down and endorse someone, most likely someone from the South, because after eight years of Buhari, I don’t think the Presidency should remain in the north unless there is some extenuating circumstances. But all things being equal, we will honour our agreement and we keep our words.’’
According to the source, “The plot is to have El-Rufai as running mate in the election. You can bet that would be hard to beat.”

When asked if the perception in the South that El-Rufai is a religious bigot, perceived to hate southerners and Christians in Nigeria generally, he said, similar thoughts were said of President Buhari before 2015.

“Believe me, a proper PR would solve everything. That’s not an issue at all. President Buhari faced worse accusations than that before 2015 and even in the lead up to 2019 election.”

He reminded that the recent controversy not to give former Vice President, Atiku Abubakar the ticket of the PDP ahead of the 2023 election was central to the plot that is being cooked for almost one year now.

“Atiku wants Atiku/Obi (Peter Obi, former Governor of Anambra State) back on the ballot. The Chairman of the Party’s Board of Trustees, Walid Jubrin, is a very conservative man and doesn’t want that. He has been briefed about the plot by President Buhari” and is not disposed to an other Atiku experience.

Mr Jubrin had revealed his displeasure at the former VP’s camp in Kaduna, saying, “They told me that I am a traitor and that I should have said only Atiku would get the ticket because I said the Supreme Court had already overthrown him (Atiku).
“They said I should say Atiku is the man that I want because I am a leader. I have to make consultations with the National Working Committee (NWC), our governors and the National Executive Council (NEC) had to decide.”

The source said Jubrin “wouldn’t voice out in such manner. His not known for speaking like that but that points to what I just said.”

Latest News SAINT MIENPAMO - October 26, 2020 - 2:04 pm 0
A group of supporters of the All Progressives Congress under the aegis of the Concerned APC members has vowed to go ahead...

I wanted to share looted palliatives on my birthday...

Oil Spill: Bayelsa Community threaten to show down with...