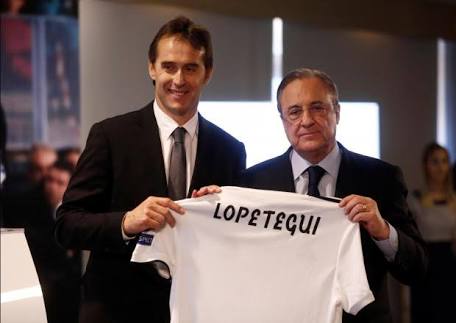 Real Madrid president Florentino Perez on Thursday defended the appointment of Julen Lopetegui as coach of the 13-times European champions.

However, the announcement was made on the eve of the World Cup, which led to the manager being sacked by the Spanish national team.

Instead of helping Spain prepare for Friday’s highly-anticipated Group B game against Portugal in Sochi, Lopetegui was in Madrid on Thursday being presented as Zinedine Zidane’s successor.

An emotional Lopetegui took to the stage in the presidential box at the Santiago Bernabeu, barely 24 hours after returning home following his humiliating dismissal by Spanish Football Federation chief Luis Rubiales.

Rubiales said he dismissed Lopetegui because he was informed about the 51-year-old’s future plans only five minutes before the news was made public. However, Perez said his club had acted correctly.

“Real Madrid and Julen reached an agreement freely. Our objective was to show transparency and normality to avoid rumours,” Perez said.

“We were surprised by the suggestion this deal could affect a dressing room of top level footballers, players who do not let anything affect their performances as sportsmen. There’s not a single argument that justifies why Julen Lopetegui will not be sitting in the Spain dugout tomorrow.”

Lopetegui remained unbeaten in 20 games in charge of Spain, who were considered as one of the favourites to win the World Cup until his sacking rocked their preparations. Former Real defender Fernando Hierro was named stand-in coach for the tournament.

“Yesterday was the worst day of my life since my mother died,” said Lopetegui as he fought back tears.

“But today is the happiest day of my life.”

The coach echoed Perez’s words as he tried to explain the decision which ultimately cost him the chance to lead Spain out on football’s biggest stage.

“We had to close the deal before and not during the World Cup. We wanted to be transparent, I didn’t want to hide anything as a coach.

“The players knew about it, there was no problem and they trained magnificently that day,” he added.

“Without any doubt when I watch the game (against Portugal) I’ll cheer the team on just like any other Spaniard.

“I feel part of this team and I’m sure we’ll have a great World Cup despite everything.”

A former goalkeeper, Lopetegui came through Real’s youth system and played one game for their first team. He later went on to coach Real’s reserve side for one season.

His only experience in charge of a top club was a trophy-less 18-month spell with FC Porto which led to him being sacked.

He now faces the daunting task in succeeding Zidane, who quit Real after winning three successive Champions League titles and a La Liga crown in 2-1/2 years.