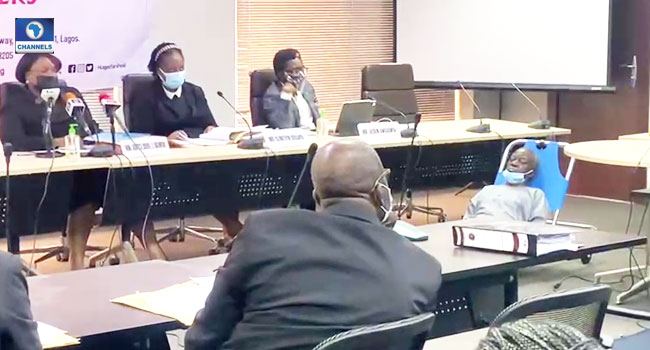 The Lagos State Judicial Panel on Restitution for victims of SARS and other related matters has summoned the Inspector-General of Police, Mohammed Adamu, and the Commissioner of police in charge of Legal Dept, Abuja, the AIG Co-Operative Police College, Ikeja and the Surveyor-General of Lagos State.

Justice Doris Okuwobi summoned the four persons on Tuesday in relation to a petition involving a bed-ridden 76-year-old petitioner, Prince Adewale Adewuyi who appeared before the panel.

The petitioner alleged police brutality, aggravated assault after his 26 acres of land in Age-Mowo village Badagry was forcefully taken over by the police in December 2013. The land is said to be worth over ₦800m.

His lawyer, Debo Adeleke told the panel that the police has continued to frustrate the efforts of the petitioner to retrieve his land despite the alternative dispute recommendations made by the Citizens Mediation Center (CMC) of the Lagos High Court.

Mr. Adeleke urged the panel to summon the IGP and the other Police officers to appear before it at the next adjourned date to explain why the Police continue to disobey the resolutions as reached by the CMC.

The Chairman of the panel, Justice Doris Okuwobi granted the request and ordered the petitioner, to serve the IGP, AIG Co-operative, COP Legal Dept, and Surveyor-General of Lagos State within seven days to state their own side of the story.

The panel has adjourned to March 30 for a report of settlement.