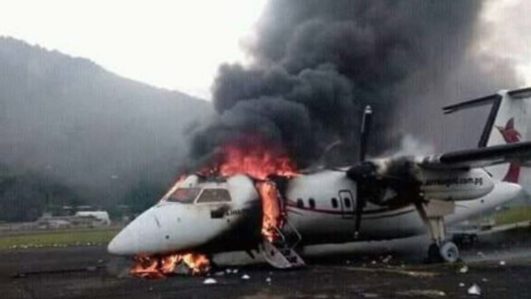 Papua New Guinea has declared a state of emergency in its rugged Southern Highlands after an armed mob went on the rampage, torching a passenger plane and the local governor’s house.

Police said crowds were angered by a court decision to dismiss a petition against provincial governor William Powi’s 2017 election, amid concerns of corruption.

They burned down Powi’s home and the local courthouse in the town of Mendi late last week and destroyed an aircraft belonging to the national carrier at the airport. 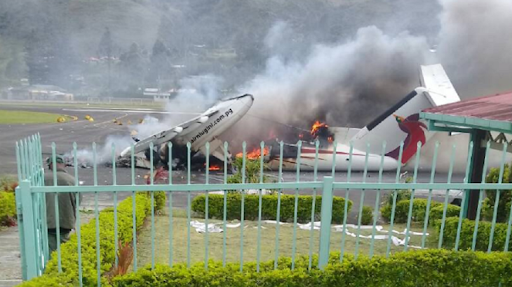 No one was hurt, and Air Niugini said the crew of the Dash 8 airliner were safe and had returned to the capital Port Moresby.

The airline said it was conducting “a full review of what occurred, and a risk assessment in accordance with PNG Civil Aviation Safety Authority requirements”, with services to the area suspended.

Civil Aviation Minister Alfred Manase said the airport at Mendi would remain closed indefinitely, with staff moved to other locations for their safety.

“This was indeed a very sad day for the civil aviation industry in PNG,” he told reporters Monday.

“Normalcy is being restored in the province and today we want to apologise to Papua New Guinea for the recent events that had taken place, mainly out of frustration,” he told the Post Courier newspaper Monday.

“No person is above the law and all involved will face the full force of the law and answer for any crime they have committed,” he added in a statement.

Thomas Eluh, a former policeman, has been given constitutional emergency powers, with O’Neill personally overseeing operations of the provincial government.

A Radio New Zealand reporter in Mendi, Melvin Levongo, said police had been outnumbered and unable to stop the rioters who were armed with high-powered weapons.

“The mob wanted to do something… people were very angry towards the governor… and so did something to get the attention of the current government,” he told the broadcaster.

“In PNG history, nobody burnt down Air Niugini (planes) before. It’s our pride, and for the people in Mendi to be doing that, it’s sad. The whole nation is unhappy about it.”