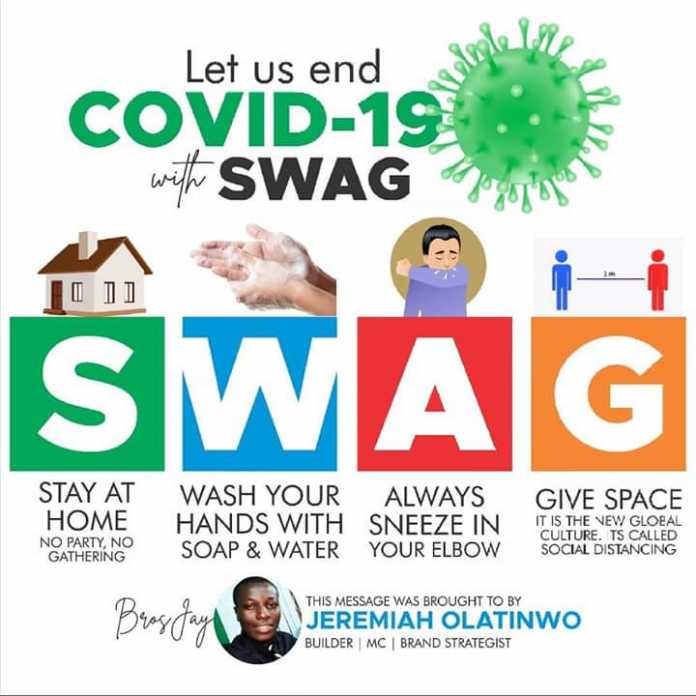 A graphic designer in Nigeria, Jeremiah Olatinwo, has demanded compensation from Ogun State Government for using his graphics design to create awareness about Coronavirus without his permission.

Olatinwo had designed an image to raise awareness on the virus and how to stay safe from it.

He used the ‘End COVID-19 WITH SWAG’ to launch a media campaign on steps Nigerians can take to curb the spread of the virus.

He was however, left distraught when the Ogun State Government placed its official crest on it and uploaded it on its official website.

In a chat with our correspondent, Olatinwo expressed anger at the action of the state government without reaching out to him.

He said, “As a social media enthusiast and digital marketing expert, I designed a media campaign themed ‘END COVID-19 WITH SWAG’ and it was widely accepted and distributed on social media.

“I got a call from a friend who saw and also shared my creative work that the Ogun State Government had plagiarised my concept – word for word, colour for colour without giving due credit.

“Due compensation is expected for the creative work and their plagiarism as the design got impressions on their page, people have seen it and some have done screenshot and shared on various platforms.”

He added that he attempted to reach out to the social media handler of the state government but was blocked.

The image, which has now been deleted across the social media platform of the state government, was the same concept without little adjustment to Olatinwo’s design.

Efforts by our correspondent to get the comment of the Kunle Somorin, Chief Press Secretary to Ogun State governor, Dapo Abiodun, was not successful as he refused to respond to calls and text messages sent to his mobile number.