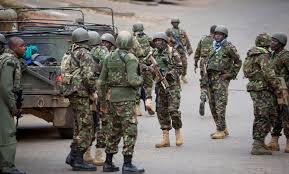 Terrorists and Somalian military mens are still struggling to take control of the country. For several years since 1991, Somalia federal government has not known peace from Attacks from local militia such as Alshabab and Taliban. Cases of planned Attacks have been reported in Somalia on different occasions. People have lost their lives while doing their business due to public shooting or Bombing of social places.

Well, yesterday, there was tension in Somalia mainland after former president Honerable Muhammed was attacked by government military men stationed at place where he was passing by. It is Reported that, the president was heading to the capital Mogadishu when government officers fired several bullets at his convoy. Luckily, he was not injured and his security detail reminded firm, not to fire any single shot that could have resulted to activate shooting from both sides.

There is tense political activities in Somalia lately. Several somalis Rejected amove by their president to extend his term in office for two years. They claimed that the incubent was planing to postpone election in his favour.

Well, after deliberation from different camps. The president agreed to resume negotiations on how the country will have elections soon, in order to stop the internal flights among communities.

‘God Should Kill Me And Bring TB Joshua Back...