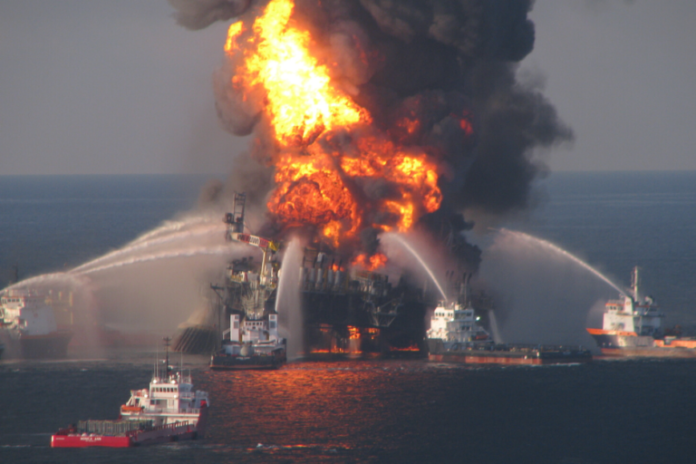 There is rising outrage in Bayelsa following the cry by Indigenes of the Koluama 1 community of Southern Ijaw Local Government area of the State over the massive crude oil spillage along the creeks and waterways from the damaged pipes of the Funiwa oil field, off the coast of the state.

The massive oil spillage, which spread across over four kilometers, occurred at about 6pm on Friday and already affecting aquatic life of the people of the area with dead fishes being washed ashore and livelihood of the koluama indigenes, which is predominantly fishing, halted.

The Chairman of the KEFFES Rural Development Foundation, Mr. Mathew Sele-epri, who confirmed the development, said he was alerted at about 6pm about the spillage and he immediately called the major operators in the area, but the source of the spillage was not immediately confirmed.

“As at the time of taking a boat ride long the affected parts of the waters, dead fishes were noticed floating along the shoreline of the sea. And I noticed that the ecosystem is being damaged and aquatic life of the people grossly affected.”

The Secretary of the Koluama Youths Association, Oyinme Barnarbas allege that the recent strange movement of helicopters conveying personnel of chevron on Saturday night to the platform showed that the company is worried about the spillage and trying to cover-up its allege negligence.

According to Barnabas, ”while we were fishing, we saw helicopters with Chevron Nigerian Personnel being conveyed back to the platform and inspecting the damage and spillage. We suspected that the company has had a ruptured pipeline. We also noticed that the light from the gas flare is low which may have been caused by the massive leakage.”

Some Elders of Koluama community including Chief Young.S.Goli and Chief Anderson Bolubo also confirmed the oil spillage, urging the relevant agencies to compel Chevron oil limited to immediately start mopping up activities by sending relief materials and medical supplies to the people of the area.

While Chief Bolubo argued that investigation by the youths leadership in the community have traced the source of the spillage to the Chevron owned Funiwa oil field with a threat that the community is ready to shut down the Chevron oil activities if immediate remediation is not started.

Chief Young Goli said though past interaction between the community and chevron have not yielded any positive actions, ”The massive spillage we are witnessing now was caused by the Chevron company. And we want them to come and talk to the community. We don’t want mediators.”

Meanwhile, a source within chevron said it is not from their facility but it
suspected it to be “AUNTIE JULIE” an oil facility owned by Conoil limited .

NYSC deploy I,500 corps members to Bayelsa, task them on Covid-19 Vaccine

JUST IN: EFCC Chairman Collapse on stage During Speech...